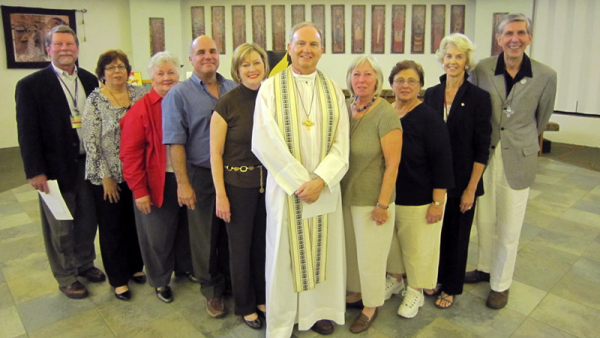 The Peoples’ Eucharistic League developed and grew into the mid-twentieth century. Thousands of laywomen and men sought to be associated with the mission of the Congregation of the Blessed Sacrament as communities were established throughout the United States and in Ireland-Great Britain and the Philippines, which were part of the Province of Saint Ann. According to Father Leo Rousseau, SSS, the longtime Director of the PEL, its mission was “to provide loyal and true adorers of our Divine Lord solemnly and perpetually exposed on the altar.” He went on to explain: “It also endeavors to foster in souls the spirit of love and practical faith in the real presence of Jesus in the Sacrament of Love – a faith that finds expression in frequent assistance at Holy Mass and reception of Holy Communion, and also in the assiduous practice of adoration and frequent visits to the Blessed Sacrament.”

By the Provincial Chapter of 1958, the directors of the various lay associations reported the enrollment of some 30,000- plus members among the groups of lay associates.

Of all the various components of the Peoples’ Eucharistic League, The Eucharistic Fraternity involved its members in the most intense living out of the Eucharistic vocation. Father Rousseau defined their commitment in this way: “A society of the faithful associated with the Congregation of the Blessed Sacrament who are desirous of attaining as far as possible in the world the ideal of Christian perfection by a special devotion to the Holy Eucharist. To this end, they profess to consecrate themselves unreservedly to the service of Christ’s Divine Person in the Blessed Sacrament and to undertake, in union with and under the direction of the Blessed Sacrament Fathers, to be true and frequent adorers as well as devoted and zealous apostles of the Holy Eucharist.”

Those who committed to The Eucharistic Fraternity went through the following:

By the end of the 1950s and on the eve of the Second Vatican Council, a liturgical revival was in the air. The number of lay people involved in the various groups of lay associates was lessening as was the commitment to the devotion and practice of adoration.

In our next installment, we will talk about the Second Vatican Council and its impact on the Congregation, its mission, and its sense of identity, and eventually on what it meant to be an Associate of the Blessed Sacrament.

Tweet
Published in Eymardian Family News
More in this category: « Eucharistic reflections on COVID-19 pandemia
back to top