The First Batch of Aggregates in Tacloban 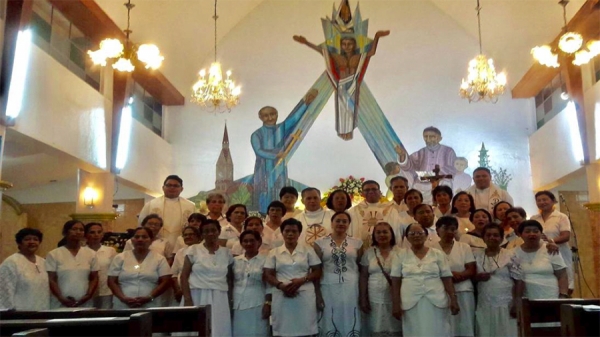 August 6, 2017, Feast of the Transfiguration of the Lord, marked the graduation of the newly received members of the Aggregation of the Blessed Sacrament (ABS) in Tacloban, Philippines. After attending the nine-month formation program that began in November last year, 31 candidates took their Oath of Promise in the Eucharistic celebration presided by Fr. Joseph Matitu, SSS Province of Our Lady of the Assumption (POLA) provincial superior (Director of the Aggregation of the Blessed Sacrament) together with the concelebrating priests: Fr. Melchor Castañeda, SSS; Fr. Renoir Oliver, Jr., SSS; and Fr. Jonelito Sison, SSS (Assistant Director of ABS).

At the Rite of Graduation, certificates were handed to them by Fr. Melchor and the medals were conferred by Fr. Provincial. The graduation was concluded by a simple agape at the Eymard Hall. The day after taking their Oath of Promise, the members of the Aggregation went back to their ministries and their respective religious groups imbued with much zeal and enthusiasm to perform the works expected of them. They were proud to wear the cross that remind them of their being part of the Eymardian Family.