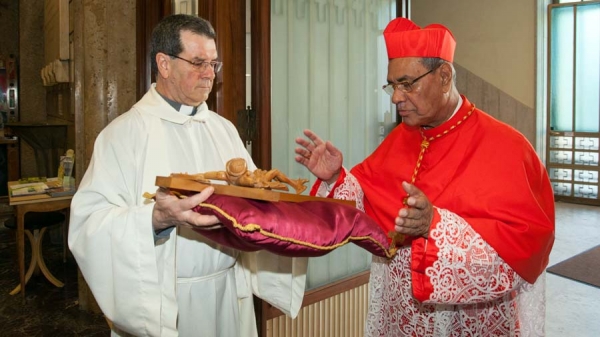 “... I can’t any more address you as ‘Eminence’… rather, I want to call you ‘Father’ and, also, allow me to use the familiar form ‘You, Father’, hoping that from today, Father Patrick D’Rozario, you regard us as a your adopted sons. Thus, Father, I want to give you, symbolically, the keys of the doors of this church and those of the tabernacle: signs of what is most precious to us – the church and the Eucharist.”

These words of cordial simplicity of Fr Maurizio Zorzi sss, the parish priest of the church of the Canadian Martyrs, reflected the fraternal and joyous climate that from 12 to 15 May 2017 caracterised the presence of Patrick Cardinal D’Rozario csc, the archbishop of Dhaka (Bangladesh). They even summed up the liturgical and ecclesial significance of his taking possession of the cardinalate title, which Pope Francis assigned to him on last 19 November 2016. The event coincided with the feast of the principal patron of the parish, Our Lady of the Blessed Sacrament, 161 years from the foundation of the Congregation of the Religious of the Blessed Sacrament and in the presence of Father Eugênio Barbosa Martins sss, the Superior General. And as if these were not sufficient reasons for joy in the community, on 13 May 2017, which is also the feast of Our Lady of Fatima, it was the birthday of the youngest member of our community, Father Alex Moreira sss!

Underlining these happy coincidences, Father Patrick repeated many times the fact that he feels at home in our religious community and in the parish of which he is now the shepherd. In addition he reiterated his deep gratitude to the Holy Father, who has shown careful attention to the Bengalese people, among whom the percentage of Christians, although very incisive in the social fabric, amounts to only 0.3% in the fourth largest Muslim nation of the world. And recalling the gift that Jesus makes of himself in every Eucharist, Father Patrick confided that he has often told his compatriots of other religious: “I love you,” seeing in each one the face and body of Christ. Thus, this very small Christian community lives deeply as light and salt of the Bengalese soil, by means of the witness of evangelical life and generous charity in the areas of education, healthcare and promotion of human welfare.

Many other challenges are faced together – such as that ecological threat caused by flooding and mentioned in the Encyclical Letter Laudato Sì, or other challenges from outside the peaceful local culture, like the phenomenon of terrorism. Rather than weakening intercultural and interreligious coexistence, these challenges have opened up the pathways of dialogue and a communal endeavour among religious leaders with the help of the Bengalese political authorities. In short, the days spent with Father Patrick D’Rozario in our midst were beautiful and intense, starting a journey together that is promising. Thanks to you, dear Father-Cardinal Patrick D’Rozario csc, for your great simplicity has left a memorable mark on the calendar of this pastoral year!

View this gallery on Flickr
View the embedded image gallery online at:
https://ssscongregatio.org/en/news/archives/item/40-you-father-patrick-d-rozario.html#sigProIdf867b6a9d8
More in this category: « Paying tribute to a forgotten pioneer: the unveiling and blessing of Darien Pullen’s sculpture of Patrick Bonaventure Geoghegan OSF Vocation Convention »
back to top