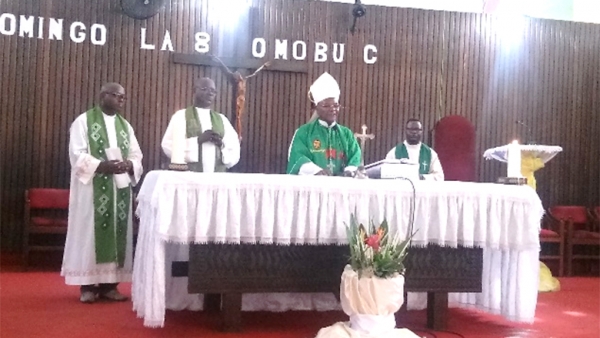 On Sunday 3 March 2019 in Saint Joseph church during a Eucharistic celebration presided by His Excellency Bishop Kisonga, Auxiliary Bishop and Vicar General of the Archdiocese of Kinshasa, the Church of Kinshasa paid a final tribute to Reverend Father Luigi Brugnetti. This valiant missionary, who died on 29 January in Italy, devoted a good part of his ministry to the ongoing formation of the extraordinary ministers of the Eucharist called Nkumu, an apostolate he initiated in the Archdiocese of Kinshasa and that today comprises more than 2000 ministers, men and women. "Every tree indeed is known by its own fruit" (Lk 6: 44). It is understandable that the multitude of extraordinary ministers of the Eucharist, all in uniform, coming from everywhere to take part in this celebration, testifies that Father has left to the Church of Kinshasa fine fruits.

Yesterday, Father Eymard wanted to spread the Eucharistic fire to the four corners of Paris that needed it so badly. Today, it is Father Brugnetti who enkindled the four corners of the archdiocese of Kinshasa by creating the service of the extraordinary ministers of the Eucharist. Thanks to him, many patients weakened by their condition are strengthened by receiving the Body of Christ in their homes. For this, this priest has ensured that the laity responsible for exercising this pastoral care receive an ongoing formation carried out at the Eucharistic Father Eymard Centre of Mont-Ngafula. Thus, in his homily, at this celebration, the Father Provincial, Anaclet Bambala, invited all the extraordinary ministers of the Eucharist to take their formation to heart by walking in the footsteps of their initiator.

The figure of Father Luigi Brugnetti will therefore remain engraved in the memory of the Church of Kinshasa as a model of fidelity and commitment in the service of Jesus in the Eucharist. The Father Eymard Eucharistic Centre, following the person who will henceforth be regarded as the icon of this ministry here in Kinshasa, will continue to work strenuously to perpetuate it and make it still fruitful within the archdiocese of Kinshasa, as well as beyond its borders, because it is through this apostolate that the religious of the Blessed Sacrament of the Blessed Province Isidore Bakanja also share their ideal, namely, “to live the mystery of the Eucharist fully and to make known its meaning, so that Christ’s reign may come and the glory of God may be revealed to the world” (RL 1).

Tweet
Published in News
More in this category: « Echoes of the SSS presence in the Cameroons Brother Giovanni Nadiani sss »
back to top