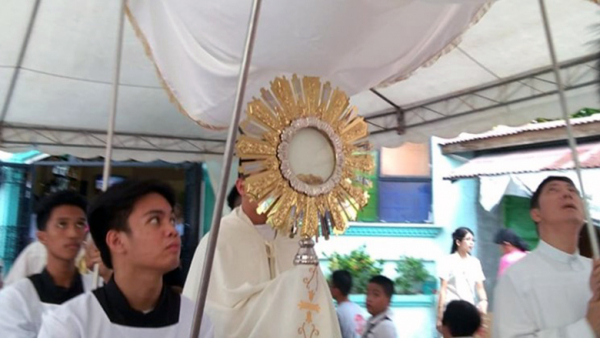 The Vicariate of Santa Rita de Cascia, composed of the parishes of Santo Cristo de Bungad, Resurrection of the Lord, San Antonio de Padua, Christ the King, Hearts of Jesus and Mary, Santa Rita de Cascia, and Saint Jude Thaddeus, had a special joint celebration of the Solemnity of the Body and Blood of Christ (Corpus Christi) last June 23. It was the first of such endeavor in the Vicariate and in the Diocese of Cubao (Philippines) spearheaded by Rev. Fr. Joseph Matitu, SSS, parish administrator of St. Jude Thaddeus Quasi-Parish, the youngest parish in the Vicariate and newly administered by the Sacramentinos of the Province of Our Lady of the Assumption. The celebration consisted of three parts: a talk on the Eucharist and the youth by Rev. Fr. Vergel Dalangin, SSS, the Eucharistic celebration presided by the Most Rev. Ernesto Salgado, archbishop emeritus of the Archdiocese of Nueva Segovia, Ilocos Sur, and a grand procession.

In his talk, Fr. Vergel stressed that the Eucharist is a homecoming, a gathering, a remembrance, a true celebration with Jesus, the Bread of Life, at the center. He invited the youth to answer the call to become bread so that no one in the world would be hungry again.

After weaving together the first reading about Melchizedek’s serving bread and wine to Abram and the Gospel reading of the multiplication of the five loaves and two fish, Archbishop Salgado exhorted the congregation to pray for a greater appreciation of Christ’s generosity in giving Himself to us and for the grace to be able to share whatever we have with others.

A procession followed the celebration of the Mass. A large consecrated host encased in a beautiful monstrance was placed atop a makeshift altar on a vehicle. About 600 people including priests, sisters, and laypersons processed through the streets leading to the Parish of the Hearts of Jesus and Mary, a distance of around 2 km from St. Jude Thaddeus Quasi Parish. From the main entrance of the Church of the receiving parish, the Blessed Sacrament was received and carried towards the altar by Rev. Fr. Jojo Simon, the parish priest and chancellor of the diocese. The celebration ended with the Solemn Benediction.

In Focus: The Talk of Fr. Vergel Dalangin on The Eucharist and the Youth

Fr. Vergel started his talk by speaking about the Internet culture and social media websites such as Facebook and Instagram where specific contents can be labeled by hashtags (#), consisting of a word or phrase with a hash symbol in front of it. The youth almost always have an opinion about something and they want to be heard. Fr. Vergel knows this because of his daily interaction with novices, being the novice master of the congregation in the Philippines.

According to him, unlike the novices of old who followed orders without question, the novices of today ask “why” and even give suggestions. The youth want to express and share their feelings, emotions, opinions, and information about themselves and others or about the latest news or issues. Thus, because of this willingness to share everything, they should be guided toward proper judgment.

Fr. Vergel peppered his talk with hashtags which he described as symbols that show a common thought or idea; they point to a reality; they invite you to see what’s behind the hashtag; they are a living collective.

In like manner, the Eucharist, says Fr. Vergel, contains the whole range of things about the Church that we continuously attempt to understand, and the only thing we can do is to adore It. When we sit in front of the Blessed Sacrament, our purpose should not only be to see and watch our beloved Lord but more importantly, to allow Him to see us especially during the times when we are weary and burdened.

The Eucharist “points to a reality that is divine”. It is an external sign (a sacrament) that leads to internal grace, “the holy hashtag that invites us to see that there is a deeper meaning in It (#love, #Presence, #communion, #BodyofChrist, #theEucharist)”. There is a story behind the Eucharist; it was instituted on the night Jesus was betrayed. And there is the eternal collective gathered as an offering to the Lord.

Seenzoned is a term used in social media. It is explained this way: It happens when you send someone a message and you see on your gadget that the message has been “seen”, but the person does not reply. Fr. Vergel said that Jesus is seenzoned when we do not participate in the Holy Eucharist.

When participating in the Holy Eucharist preparation is important. There are those who post their outfit of the day (#ootd), which would indicate a positive self-image. Fr. Vergel stressed that if we care about how we look on the outside, the more should we care about how our heart and soul look. Challenges are popular among the youth, so why not start a going-to-confession challenge? (#blessmefather, #brokenbutblessed, #bereconciled).

Fr. Vergel made a comparison between bread and beer, having worked as a beer taster for three years before entering the seminary. Bread and beer have the same ingredients, but the similarity ends there. Bread dough undergoes suffering (baked in an oven) to become bread; beer dough is babied as it is placed in a large container set at a temperature of 10 degrees for one week. Bread can remove hunger and be consumed by everyone every day, while beer cannot. Bread is solid while beer is diluted.

In Focus: The Homily of Most Rev. Ernesto Salgado, Archbishop Emeritus of the Archdiocese of Nueva Segovia, Ilocos Sur

The keywords in Archbishop Salgado’s homily are “Eucharist”, “generosity”, “sharing”, “hunger”, “the poor”.

In the first reading, Melchizedek’s welcoming manner of serving bread and wine to Abram is linked to the Eucharist as it reminds us of the generosity of Jesus who gave his body and blood in the form of bread and wine. The Archbishop pointed to an indispensable element to celebrate the sacrament, that is, sharing our goods with those in need.

In the Gospel, a great crowd followed Jesus to listen to Him. At suppertime, there were only five loaves and two fish to feed all of them. Jesus blessed, broke, and gave the bread and fish to his disciples to set before the people. Afterward, the leftovers filled 12 baskets. Here we see a solution to the problem of hunger, and that is sharing in common all the food that a community has and trusting in the generosity and love of God, who can work miracles.

The loaves and fish put in common stand not only for the food and money that the community owns but also for the intelligence, strength, and abilities that the Lord has given each member of the community, which can be used for the good of all. However, selfishness stands in the way of alleviating the plight of the poor.

In conclusion, the Archbishop exhorted us to pray for a greater appreciation of Christ’s generosity in giving Himself to us in the Eucharist and for the grace to be able to share whatever we have with other people.

Tweet
Published in News
More in this category: « Santa Cruz Parish in Manila Celebrates 400th Anniversary Aggregation of the Blessed Sacrament in Argentina »
back to top