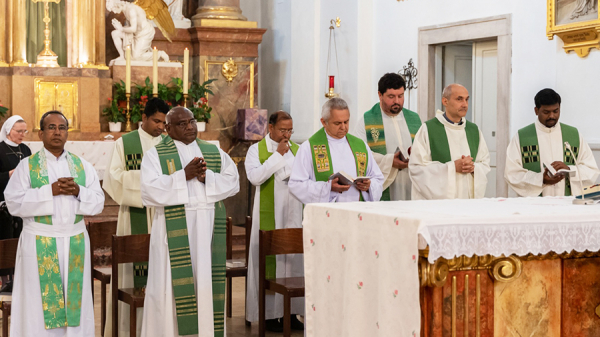 The SSS-administered Gumpendorf Parish in Vienna (Austria) was officially handed over from the SSS Province of Our Lady of the Blessed Sacrament (Italy-Spain-Austria-Cameroon) to the SSS Kritu Jyoti Province (India) on the 2nd of August 2019, the feast of St. Peter Julian Eymard. To mark this historic event, a handover and acceptance ceremony was made in a solemn Eucharistic Celebration on August 25, 2019, attended by, among others, representatives from the general administration: Fr. Eugenio Martins, sss (superior general) and Fr. Philip Benzy Romician, sss, (treasurer general); representative from the Italian Province: Fr. Domenico Avogadro, sss (provincial superior); representatives from the Indian Province: Fr. Peter Jeyakanthan Dorai, sss (provincial superior) and Fr. Rosario Pushparaj Sebastian, sss (provincial treasurer); the SSS Vienna Community, and parish leaders. After the celebration, Agape meal and festivities followed in the parish hall.

After a couple of years of preparation, the SSS Vienna Community now comprises Fr. Nelson Soosai Marian, sss (parish priest and community superior), Fr. Prabu Metha, sss (treasurer), and Fr. Joseph Jacob, sss. At the end of the Eucharistic Celebration, Fr. Domenico Avogadro and Fr. Peter Dorai delivered speeches in Italian and English expressing gratitude and encouragement. Father General in his turn assured the community of the guidance of the Holy Spirit. Fr. Nelson thanked Fr. Josef Wenger, sss and Fr. Antonio Pedretti, sss, as well as their predecessors from the former South Tyrol Province, for their pastoral work in the parish which has prepared the ground for them. The new administration hopes to breath fresh air to Gumpendorf community as they share life with them and promote their relationship with God.

The Blessed Sacrament religious have been active in Vienna for over 90 years. The initial foundation took place in 1926 by the confreres from Bolzano (South Tyrol) in Laarberg which is located in the 10th district of the city, where the religious tried to share with the faithful for 20 years the spirit of St. Peter Julian Eymard. A convent was built and subsequently, a church was erected for the worship and services in the context of a parish. The house had the function of a convent for adoration and novitiate, and, for a short time later, also as scholasticate. The fathers, besides carrying out the pastoral care of the territory, also conducted religion classes.

The Vienna house changed proprietorship several times. Until 1931, all the foundations of the Congregation were directly under the General Administration. In the General Chapter of 1931, the first Provinces were born: Italy, Holland, Canada, USA, and France. The Vienna House was entrusted to the Dutch Province. However, Bolzano continued to provide personnel and much freedom was left to the local superior.

In the General Chapter of 1937, the German Province was created and Vienna became part of it. This time, Laarberg was erected as a parish. Meanwhile, the German-speaking scholastics were gathered in Vienna, where they could attend the University as auditors since most of them did not hold any high school diploma. Home lessons were also held and some professors came to give private lessons to students. This continued until Austria's annexation to Germany with Hitler in 1938.

During World War II, the convent was also used as a military residence, especially for the FLAK (aircraft-defense cannon) soldiers, who had positioned their defensive apparatus nearby. This extremely dangerous situation continued almost until the end of the war. When the German army withdrew in 1945, the convent was almost entirely occupied by the Russian military. Pastoral care could only be carried out with difficulty.

The situation continued after the end of the war for several more years, as the territory had been declared a Russian occupation zone. The parish priest and a brother remained in the house and kept the place, while other brothers moved to Gumpendorf inside the city. Two communities existed for a time until everything was resolved and the property in Laarberg could be sold and the community closed. The convent and chapel were sold to the "Neulandschule", while the parish was assumed by the diocese. These were the first 20 years of the SSS mission in Vienna.

Given the dangerous situation in Laarberg due to the bombing by the Allies and the entry of the Russians into Vienna, the desire to move to the city center was born for a safe and better pastoral atmosphere. After several meetings with the Scottish Benedictines in Vienna, who by then had a scarcity of personnel, with the consent of Cardinal Innitzer, the Congregation assumed with property rights the administration of St. Egidio Parish or better known as Gumpendorf Parish in 1946.

The house remained under the administration of the German Province until 1955 when Switzerland became an autonomous province. The proceeds from the sale of Laarberg property was then used for the construction of formation centers. Six years later, when South Tyrol was elevated to a Province, Vienna community and the administration of the parish was entrusted to the South Tyrol Province, which de facto had been the arrangement since 1939. This set-up lasted for more than 45 years.

In 2007, the Province of St. John the Evangelist (South Tyrol) was suppressed and the communities of Bolzano, Merano, and Vienna were incorporated into the Province of Our Lady of the Blessed Sacrament (Italy). The assignment of the offices, particularly of the parish priest and the community superior, were mostly carried out by the confreres from South Tyrol. But because of the scarcity of vocations, especially with the knowledge of the German language, there was an eventual prospect of closing the community.

During the visit of Fr. General in 2016, Cardinal Christoph Schönborn expressed his wish that the Sacramentinos would continue their mission in Vienna. He agreed with the proposal made by the General that our Indian confreres could continue to maintain this community with the parish. The Indian Province accepted the proposal and two Indian religious were sent to Vienna in view of taking over the pastoral care of the parish after learning the German language. With the arrival of a third Indian religious in July 2019, the last step of the handover was scheduled in August 2019.

The official transfer of the Gumpendorf Parish from the Italian to the Indian Province took place on 2nd August, the feast of St. Peter Julian Eymard. The ceremony and festive celebration, however, were made on the 25th of August for reasons of feasibility and availability of the parish and the official representatives of the Congregation.

We wish the new team an abundance of God's grace for this new task. Let us accompany them with our prayers.

By Fr. Peter Jayakanthan Dorai sss, Provincial Superior of Kristu Jyoti Province, in his address during the handing over and acceptance ceremony.

It is a dream came true. Yes, it is the dream of Fr. Eugenio Barbosa Martins sss, Superior General, like that of St. Eymard who said, “If it is His project, the Eucharistic Lord will make it happen”. We all dream, but a good leader is he who dreams for the future and actualizes it. Yes, it is the dream of our Superior General that this Vienna Mission should continue because here we have a legacy of St. Peter Julian Eymard and SSS history. So, we came here purely with his initiative and we will live this Eucharistic dream of our founder. Fr. General, I thank you for your trust, invitation, and constant guidance.

This day 25th August 2019 will be part of the history of our Congregation especially for the Province of India as we offered a Thanksgiving Eucharist along with the community of St. Egid parish to mark the transfer of the mission and the community from the Province of Our lady of the Blessed Sacrament (Italy-Spain-Austria-Cameroon) to the Province of Kristu Jyoti (India). It all started in 2016 as Father General requested Fr. Jegaraj sss, the then Provincial Superior, to look into the possibility of taking up and continuing this project. Here, I thank Fr. Jegaraj and his council for beginning the process and choosing the first community of religious comprising Fr. Joel Nelson Sosai (Superior), Fr. Prabu Metha (Treasurer) and Fr. Joseph Jacob.

I am grateful to the Archdiocese of Vienna and His Excellency Cardinal  Cardinal Christoph Schönborn for approving our ministry here. The two pillars, Fr. Joseph Wenger sss and Fr. Antonio Pedretti sss, carried on the Torch of Eucharistic fire for the Congregation and for the Province of Our Lady of Blessed Sacrament. They have been wonderful mentors for our religious to take this responsibility confidently and courageously. Thanks a lot, Fathers. God bless you with good health and peaceful time ahead.

Finally, we are indebted to the Italian Province of Our Lady of Bl. Sacrament for generously handing over the legacy they carried on by offering this Eucharistic mission with great trust. We offer our gratitude to Fr. Domenico Avogadro, Provincial Superior, for this gesture and mission. We will carry on this mission of Eucharistic fire with our energetic young religious making SSS history as sons of St. Peter Julian Eymard.

The SSS mission in Vienna, which began as early as 1926, was carried out by various SSS Provinces (Holland, Germany, Switzerland, South Tyrol) until the transition from the Province of South Tyrol to the Province of Our Lady of the Blessed Sacrament in 2007. We pray for the Indian religious who have commenced their ministry here that they may receive and renew their strength through the prayer before the Blessed Sacrament to face the challenges and to build the parish as a Eucharistic community in the footsteps of our founder, the Apostle of the Eucharist.

Last modified on Sunday, 15 September 2019 22:24
Tweet
Published in News
More in this category: « Celebration of the Solemnity of Saint Peter Julian Eymard and Professions of Vows Eurocamp 2019 »
back to top