The Story of the Aggregation 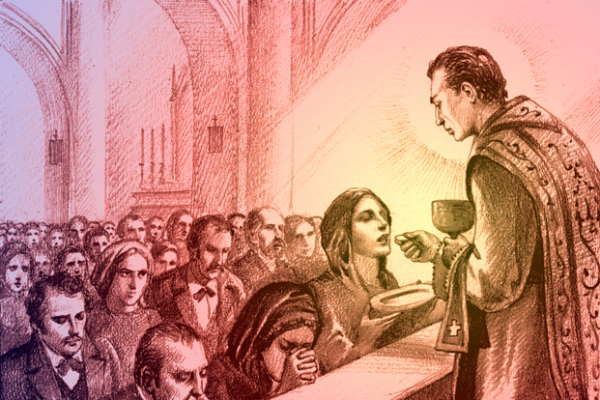 The Sentinel of the Blessed Sacrament was a magazine published monthly by the Blessed Sacrament Congregation. Its purpose was to provide stories and material to inspire a devotion to the Eucharist among laypeople. It had its origins in the Catholic Archdiocese of New York. In 1902, the editor of the magazine, Eliza Lummis, asked the Blessed Sacrament Fathers, who had recently established a community in New York City to take it over. It became the official publication of the Peoples’ Eucharistic League, as well as The Nocturnal Adoration Society.

In the January 1913 issue of the Sentinel, we read: “With the new year, we trust many of our Associates (my emphasis) will try to get new members for our Archconfraternity (the Peoples’ Eucharistic League). If each one responded to this appeal, our already large membership would be doubled.”

There appears to be no use of the word Aggregation in the twentieth century. Clearly though, the early Blessed Sacrament Fathers who ministered to the growing community of lay people who wish to grow in their devotion to the Eucharist were referred to as “Associates”.

As Blessed Sacrament communities were founded in Chicago, Albuquerque, and Cleveland, the number of laypeople who joined the PEL grew. By the 1958 Provincial Chapter, 30,146 members were enrolled in the American Province. (It should be noted that at that time, Great Britain and the Philippines were attached to the American Province.)

Father Eymard had also started the Guard of Honor. They were encouraged to make weekly or even daily holy hours, what were referred to as a “Dialogue Eucharistic Hour”. This involved prayers, hymns, a sermon on some aspect of the Eucharist, and Benediction to end the service. The official register of the Guard of Honor was maintained at its national headquarters at Saint Jean Baptiste Church in New York City. In 1950, it reported that since its inception in 1914, it had recruited almost 14,000 members, with over 3,000 who were still active.

Last modified on Friday, 04 September 2020 17:23
Tweet
Published in News
More in this category: « COVID-19 Pandemic: A Time of Grace Ordained during Covid-19…. Empowering Lockdown! »
back to top