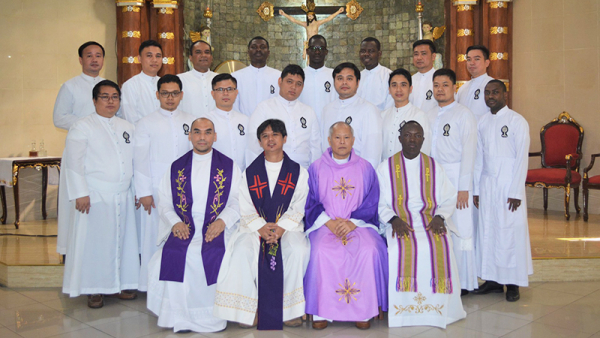 The feast of the Nativity of the Blessed Virgin Mary raises our eyes and hearts to the profound and simple presence of God in our lives. Our Lady has a choice, and she committed to that choice of her in freedom, as she said her, “FIAT”. Today, in many parts of the Congregation, there are religious who followed the example of Our Lady. In Senegal, the SSS International African Novitiate will witness our second year novices making their profession of vows in this time of pandemic. Here in EFC, we have four confreres - scholastics who renew their vows on September 8, 2020.

Two from the Region of Cardinal Emile Biayenda (Brazzaville, Republic of Congo; which is under the Province of St. John the Baptist, Canada) who applied and were approved to renew their vows for the third time.

We have Br. Ephege Jeal Dhurvy Baloula, SSS, born in the Diocese of Pointe-Noire, on July 7, 1989. Br. Ephege easily finds himself identified with our Rule of Life. Because, even before his entry to the Congregation, he was attracted to and chosen as his own our ideal, that is, “to live the mystery of the Eucharist fully and to make known its meaning so that Christ’s reign may come and the glory of God be revealed to the world” ROL #1.

Then, we have Br. Ceti Cesaire Bansimba Moukanza, SSS, born in Mindouli, Region of Pool, Diocese of Kinkala, on July 10, 1992. A person who is cool, and has a fair sense of judgment. In sizing up the situation, his capacity to make a free decision is good, because of his ability to hold on a moment, to assess it, and always mindful of not over-making decisions out of emotions.

The Province of Our Lady of the Assumption (POLA – Philippines) also shares in this jubilation. Two of our Ugandan brothers who finished their Novitiate in Senegal, Noviciat Interafricain “Le Cenacle,” made also their Profession of Vows there in 2018. This year 2020, they applied and were approved to renew their vows for the second time.

Accordingly, we have Br. Emmanuel Byaruhanga, SSS from the Diocese of Lira, Uganda, who was born on August 21, 1990. He was Baptized and at the same time received his First Communion on April 19, 2003, in Amuda, under the Parish of Our Lady of Fatima, Agwata. After six months, he completed the Sacraments of Initiation at the age of 13 years old. Br. Emma, as they called him in the community, is a person who is in good terms with everyone, even if he must be recognized he does not let himself be at the center at all times. From an English country who did his Novitiate in a French surrounding, his French language is now satisfactory, added to his love for music.

Finally, we have Br. Fred[erick] Bugembe, SSS from the Diocese of Masaka, Uganda, born on June 13, 1992. After two years, he was Baptized on August 7, 1994, at the century-old structure of Our Lady of the Rosary Parish Church at Narozali, Masaka District. He was Confirmed on November 1, 2007, at the age of 15, and received his First Communion on December 2, 2007, at Nkoni Parish, Masaka, Uganda.

These four young Sacramentinos practice their ability to make a free choice, an essential element to take up responsibility for their lives and the world around them. We pray that in this, their chosen vocation, they may be given the necessary discipline that shows itself not in aimless self-denial but in the capacity “TO GIVE UP” in order to “BE FOR”.

Last modified on Thursday, 08 October 2020 09:25
Tweet
Published in News
More in this category: « Golden Jubilee - Parish of Our Lady of the Blessed Sacrament and the Canadian Martyrs A brief reflection on the Mission of the Congregation in the light of the Rule of Life no. 3 »
back to top