An Oratory of St Peter Julian Eymard at the Shrine of Our Lady of La Salette! 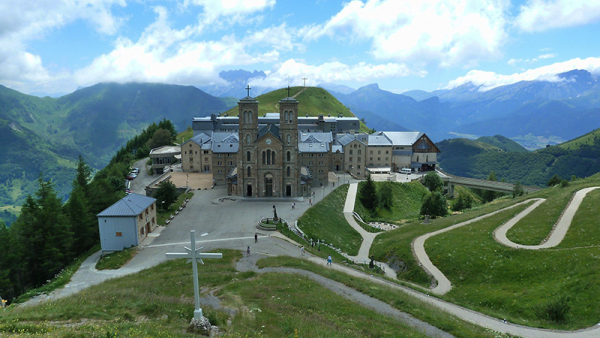 During a pilgrimage to the Shrine of Our Lady of La Salette, in the south of France, you will be surprised to discover at its centre an oratory of Saint Peter-Julian Eymard. On approaching it, and opening the door, you are welcomed by the sight of the Blessed Sacrament in this place where it is adored. This is in a magnificent monstrance embedded in a tree trunk in the shape of a cross. On either side, kneelers are evident discreetly lit. The atmosphere is ideal for recollection, far from any noise. And you will find your place there alongside other praying faithful. You will be at the heart of your pilgrimage that will make sense there.

When leaving this chapel you may ask: where am I? Why this oratory of St Peter-Julian Eymard here, at the shrine of the missionaries of La Salette? What is it doing on this mountain, at an altitude of 1800 metres, below which lies the valley of La Mure d’Isère?

The project of the oratory 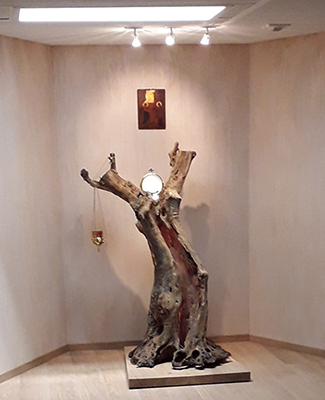 It all began at the beginning of 2011. This year was celebrated as the bicentenary of the birth of St Peter-Julian Eymard. The Centre of Eucharistic Spirituality, St Peter-Julian Eymard of La Mure, directed by Father Manuel Barbiero sss, organised various activities throughout the year. Among these events, the 4th and 5th February were highlighted by the presentation of the Eymardian Family and witnessing made by its Major Superiors, which seemed to be, among others, out of the ordinary. There was also the inauguration of the permanent Exposition about St Peter-Julian Eymard. Among those invited to take part, there was the Superior General, the Vicar General of the Sister Servants, the President of Servitium Christ and a representative of the Aggregation, as well as the vice-rector of the Shrine of La Salette, Father Jarek.

Some days after the inauguration there was a surprise for Father Manuel. He received this message from Father Jarek, who wrote: “You are invited to lunch at the community of the missionaries of La Salette”. At this meal, Father Jarek told Father Manuel in the presence of the whole community: “during the bicentenary, I became aware of St Peter-Julian’s link with Our Lady of Salette. Hence, I propose to dedicate an oratory of the Shrine to St Peter-Julian Eymard. This oratory will be reserved for silent prayer because Peter-Julian Eymard is the saint of our Deanery and our Region, an apostle of the Eucharist, and our Shrine is situated in the Parish of St Peter-Julian Eymard”. And, moreover, Father Eymard was among the first to believe in the apparition of the Virgin at La Salette. He encouraged the pilgrimage and devotion to Our Lady of Salette. And he himself was a pilgrim of La Salette at least a dozen times.

After the meal, Father Jarek and his guest went into the Shrine, where they chose the room that would become the Oratory of St Peter-Julian Eymard. Entering this place, Father Jarek looking at his guest said: “a fitting place for adoration of the Blessed Sacrament all day and even at night, Father”. Father Manuel, entirely astonished about this unexpected gift, replied: “Yes, it is a quiet place, silent and vibrant for all the pilgrims of La Salette”. When Father Manuel was preparing to make his journey home, Father Jarek shook his hand saying: “We keep this Chapel in mind, Father. So you will send me interesting display boards that relate to St Peter-Julian Eymard”.

A period of renovation took place in 2018. Father Anthony, the current Rector, supported by a Polish volunteer, undertook work there in order to make the place more welcoming and pleasant.

Today this oratory is one of the most frequented places by members of this community and pilgrims of La Salette. Every Thursday the community goes there for their adoration. And the pilgrims, those who are retreatants, spend a lot of time in adoration there, where they seek to be recollected.

In his personal notes on the wonders of the Eucharist, Fr. Eymard quotes from the book of Exodus 34:10: “I will do marvels, such as have not been wrought in all the earth or in any nation.” (NP 61,10; VI,655). Would this chapel not be one of these marvels? Ought it not be considered as activity inscribed by the Lord among all those of the celebration of the bicentenary of our holy Founder’s birth? Thus the Lord said: “For whoever has will be given more, and they will have an abundance.” (Mt 25:29).

Last modified on Thursday, 08 October 2020 09:59
Tweet
Published in News
More in this category: « A brief reflection on the Mission of the Congregation in the light of the Rule of Life no. 3 La Mure - Feast of Saint Peter Julian Eymard »
back to top