La Mure: Entering into the year of Saint Joseph with Saint Peter-Julian Eymard 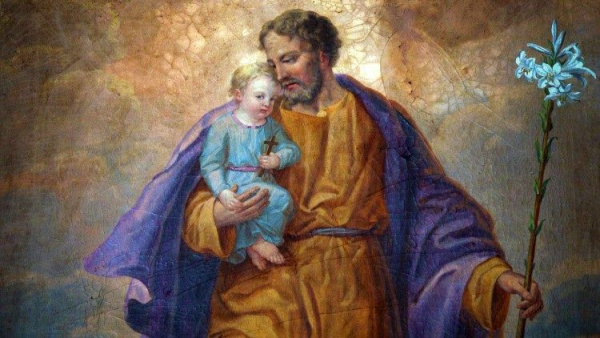 So our contribution consists, on the one hand, in showing some similarities between the vocation of Saint Joseph and that of Saint Pierre-Julian Eymard, and, on the other hand, in drawing from this the benefits for Christian life.

Between the two vocations there are some strong points of similarity

Joseph, a father by adoption and Peter-Julian Eymard a Blessed Sacrament father

Likewise, Saint Peter-Julian Eymard: father of sacramental Jesus. For, every priest, by the rite of consecration, makes Jesus truly present in the Eucharistic celebration. Saint Alphonsus de Liguori stated: "They (priests) are the active cause of the person of Jesus Christ really existing in the consecrated Host". Indeed, Joseph is: “… a father of Jesus, legal father, father by adoption, foster father. And I as a priest, I am father of the sacramental Jesus…”. (Alphonsus de Liguori, Selva, 1, 1: 3-5. Cf. Peter-Julian Eymard, The Retreat of Rome, NR 44,112)

A Christian, a father of Jesus through the common priesthood

A Christian is invited to show Jesus Christ’s presence both through his baptism and through the Eucharistic celebration. There he receives the strength to make real the proclamation of Salvation, to struggle against sin, to open himself to unity, and to sharing with the poor. He thus participates in the divine fatherhood: ‘In a way, we are all like Joseph: a shadow of the heavenly Father, who “makes his sun rise on the evil and on the good, and sends rain on the just and on the unjust” (Mt 5:45). And a shadow that follows his Son.’ (Pope Francis, Patris Corde, 7)

Saint Joseph is the protector of the divine family. He knew how to defend it, trusting and convinced that nothing is impossible to God. He attentively looked after the Child Jesus, whose fragile condition could be overpowered at any time by the wicked. He spared Mary from being condemned by the rigour of the law regarding her alleged adultery, so as not to hinder God’s design.

As regards Saint Peter-Julian Eymard, he desired to be the protector and guide of his brothers in the Society of the Sacramental Jesus. He considered it as a Mother, a servant, the family of Jesus. So he committed himself might and main to defend it and promote its dynamism and expansion.

In the same way, all Christians, called to holiness, are oriented to defending Jesus and Mary and the poor. Every Christian is invited to offer the gift of self, to creativity and to trust in God for the wellbeing of all and above all of those in need.

Many other aspects regarding the similarity between the two vocations could be indicated. Nevertheless, those presented above could offer a fine introduction to the year of Saint Joseph.