France: Meeting of Frats and Religious of the Blessed Sacrament at Colombier 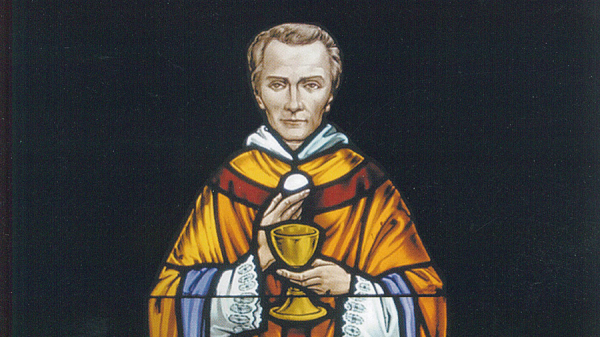 Our day of last June 19 uniting our Frats (= Fraternities) of Décines, Colombier, Grenoble and La Mure, with the Religious took place under a clear sky and pleasant temperatures. We were about twenty persons glad to be able to be together in a spiritual and friendly way, while observing the sanitary conditions.

Our theme for the day: based on the foundation of the Congregation by Father Eymard (13 May 1856), what is the eymardian spirituality in our time?

After exchanging greetings, we prayed Lauds in the chapel. Then, we settled in the large living room of Colombier, for a formation session. To begin, Father Patrick (Lecouve) asked everyone to introduce themselves in detail, so as to appreciate where each one is in their life and their spiritual journey. While it is true that we almost all know each other, after this period of isolation due to the pandemic this sharing was an opportunity for us to rekindle our wish to live something together again.

Father Patrick recommended us to delve into the written documents of Father André Guitton and ended by saying: Father Eymard has been journeying throughout his life; when he took a step, the Holy Spirit challenged him and urged him to go further. He thus has called men and women, religious and laity.

The morning continued with Tierce and Mass celebrated by Father Norbert (Pagnier) in the chapel. For lunch, we settled down under the lime trees in the pleasant environment of the park.

In the afternoon our assembly was reduced to twelve people. Father Patrick introduced workshop sharing: in 1980/90 Father Jean-Pierre (Silvant) relaunched the Frats in Rouen; there were then in France about fifty members divided into 7 Frats who gathered in Vézelay, Sens, Fécamp. In 2010, the General Council drew up the “Project of Life” on which we meet in a workshop to explore the meaning of our life and our spiritual quest: “the Eucharist at the centre of our life” and “Service of charity in social commitment”.

Time of sharing to build the future:

We ended our day with a prayer of thanksgiving and joined in singing the prayer that the Lord gave us: Our Father.

June 3, the Feast of Corpus Christi, is our 3rd anniversary of commitment to the Congregation of the Blessed Sacrament. We were 5 lay people who made our promise on 3 June 2018: Solange, Marie-Louise, Bernard, Gaby and Denise.

We were called by Father Patrick Lecouve at Colombier and we thank God for having shown us this path of life.

We are thinking of those involved whom we know in our French region and of those whom we do not yet know in our North Europe Province.

We simply say: THANK YOU!

(The editorial group of SSS-Contact congratulates all involved in the occasion of their 3rd anniversary and we wish them all the best!)

Extract from SSS-Contact of July/August 2021