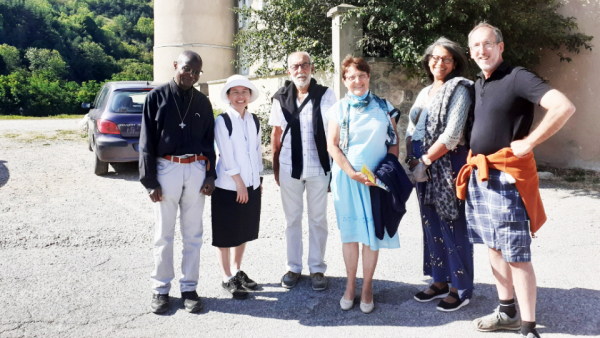 “Following in the footsteps of a Saint”

Providence and circumstances (Covid) have had their effect that at this first retreat we were finally only four, but… from four different continents: Father Thaddée Mupapa from the Democratic Republic of Congo, Sister To Trinh a Servant of the Blessed Sacrament from Vietnam, Eliana Rodrigues from Brazil, and Olivier de Kerchove from Belgium. Four continents represented in the same car, over hill and dale, all nourished daily by the same eymardian spirituality! You have here an impressive parable of the Church’s communion that we hope will bear much fruit.

A particularly fruitful retreat enabling seeing the light of day this summer had been sought, desired, prepared and prayed for a long time by the Saint Peter-Julian Eymard Eucharistic Centre at La Mure d'Isère; it was guided by Father Thaddée, in the footsteps of Saint Peter-Julian Eymard, not only in the land where he grew up and died, but also in all the places near La Mure d'Isère significant in his spiritual journey and for his first ministries in the Church.

For this, we took advantage not only of the prayerful guidance of Father Thaddeus, but also of the very rich brochures of Father Manuel Barbiero describing each place visited, all breathtakingly beautiful, and whose names are very familiar to the Blessed Sacrament religious. For us these were La Mure, Saint Romans, Chatte, the shrines of Notre-Dame de l'Osier, Notre Dame du Laus, Notre Dame de La Salette and Monteynard.

The short programme of talks on Saint Peter-Julian Eymard that we followed particularly moved us. It led us, by divine grace, to review and revitalize our personal paths of faith. The journey of each one, like each of us, is unique. It was woven together by the different elements, but we recognized that it has one thing in common, which is the presence of God in our lives and his love for all. The admirable example of Father Eymard’s life urges us to make efforts little by little to render our life a daily Eucharist through our responsibilities. This consists in seeking unity and benevolence between us, as Saint Peter-Julian Eymard pointed out to a correspondent: “Dwell in the goodness and gentleness of God towards you in order to be good and gentle towards others” (CO 1561,1).

Everywhere we met people admirable for their hospitality and spiritual vitality. Each meeting was a “visitation”. The great grace was also to stay in the very house where Father Eymard was born and to pray the offices, participate in the Eucharist, adore the Lord in the Most Blessed Sacrament in the very room where he surrendered his soul to God.

It is impossible to express sufficient thanks to Father Thaddée who gave himself without counting the cost, whereas he himself did not tire of saying how our group was both very receptive and constructive so that there took shape a mode of retreat that paid attention to what God planted in the soul of Saint Peter-Julian Eymard, as well as to the needs of our time in search of the Wellspring of Living Water.

On behalf of the group of this pilgrimage