Colombia: the Eucharist from solidarity with the poor 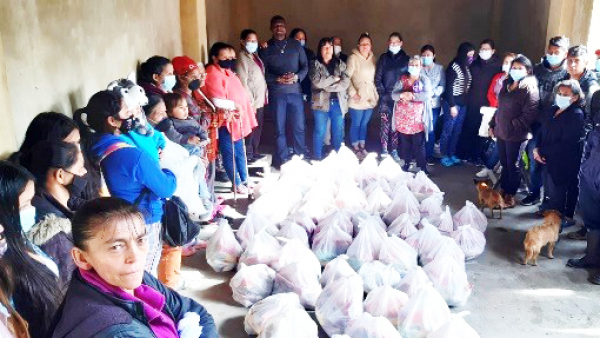 The mission of the Blessed Sacrament Religious, deriving its meaning widely from the Eucharist, urges us to be in constant harmony with the living reality of the poorest and most vulnerable in society. Following the Eucharistic Week carried out in the community of the Vocational House from 29 August to 2, September 2021 on the theme “Eucharist, bond of charity and fraternity”, it was suggested to undertake a concrete activity related to this pastorally.

Attentive to the universal Church’s proposal for the month of October, the community carried out a missionary activity and charitable deed for the poor of the Barrio el Codito, in the Usaquén-Bogotá locality. Some sixty (60) baskets and twenty (20) bags of clothing were shared with the inhabitants of the said community.

This activity enabled us to get closer to the living reality of this community’s vulnerability of extreme poverty, consisting of a lack of drinking water or toilets, food shortages, and the constant struggle to get daily bread. The approach to this sociocultural context within the Colombian capital recalls a thought expressed by the Founder: The Congregation of the Blessed Sacrament is the first religious order, the first of all, and must have the most beautiful mission, namely, everything that is miserable, most vile, everything. They think that when we call them marginalized, we cannot go any lower. We must only imitate Jesus in his mission of welcoming the poor and marginalized. I tell you, though we are not numerous enough yet, there our mission is already traced out. (cf. PS 381,2)

One would not imagine such a chaotic and inhuman reality in a big city like Bogotá but in more distant environments such as the regions of Chocó, La Guajira, among others, as reported by the media.

Although we live in the 21st century with fine political statement related to democracy and social improvement, the living situation of the poorest shows realities of extreme poverty and injustice in today’s world. This is constantly denounced by Pope Francis: “The high levels of poverty are the clearest indication of the widespread injustice that prevails in the world and our failures in implementing the most elementary rights.” (Speech of Pope Francis addressed to the Pan-American Committee of Judges regarding social rights and the Franciscan doctrine).

Hopefully we will not remain mere observers expressing some ‘homiletical’ reflections about the Eucharist but that do not touch life in concrete acts. It is urgent to go beyond the liturgical dimension of the Eucharist and embrace its entire breadth from the social and experiential perspective of human beings.