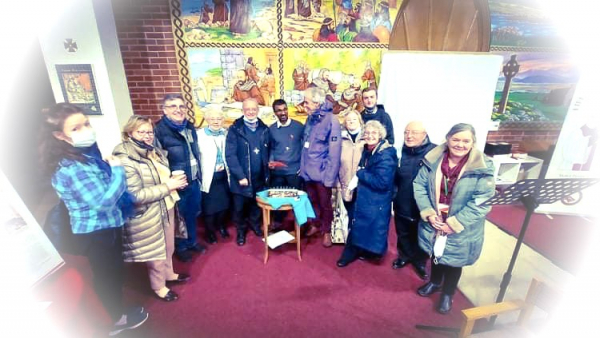 When the world came to Glasgow

Frank McKay researched and published a text mapping out the history of the laity who collaborated with the Society of Mary during St. Peter Julian’s lifetime. McKay’s insight was that “Eymard was a man who needed a ministry that was both personal and on a large scale, and he was an excellent organizer”. We know that Fr. Eymard was something of a paradox: he was both intensely private yet needed people around him, especially in the project work he undertook in the different spheres that made up his life of ministry.

Here in Scotland the lay ministry teams who work alongside SSS religious have touched something of this instinct for themselves, as successive COVID lockdowns and restrictions brought us all together to discern, plan, and then implement an exciting public eucharistic miracles exhibition inspired by Blessed Carlo Acutis.

The many eucharistic miracles that have populated the Church are not an end in themselves, but act as signposts, directing people to be renewed within the presence of the Lord Jesus in his sacrament. This year-long project came to fruition recently.

Cathleen Connelly is a member of Scotland’s Life in the Eucharist team, and a recently commissioned member of the Aggregation of the Blessed Sacrament. I asked her to provide some insights for our international readers about the experience from beginning to end of learning how to exhibit something so central to our faith at a time when many in the world were slowing down, yet Scotland’s Eymard family found themselves picking up a busy pace inspired by an invitation received from God. 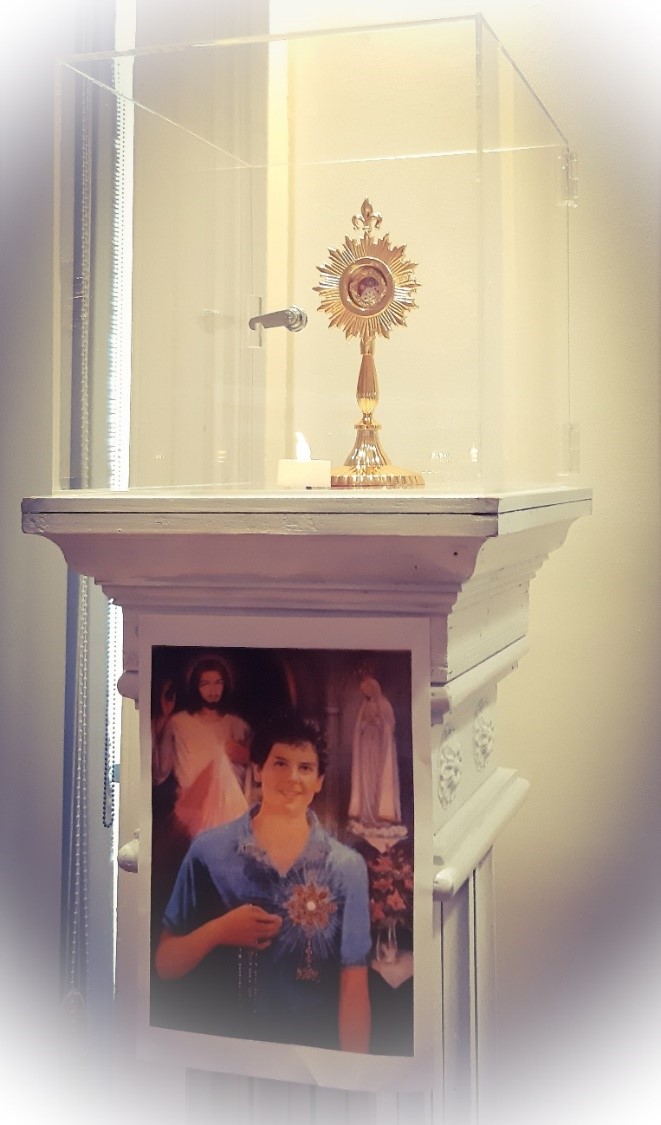 "The project of hosting The International Eucharistic Miracles Exhibition collated by the young Bl. Carlo Acutis, whose love and devotion for the Blessed Sacrament birthed the desire to gather all the Eucharistic Miracles worldwide into a single collection was an invitation we took seriously. Under the spiritual direction of Fr. Darren Maslen SSS the team planned, organized, and worked tirelessly to ensure the exhibition was successful.

Maria Novani is the current Life in The Eucharist team leader and had a long hope for the possibility of hosting the exhibition to accompany our ongoing ministry inspired by the Eymardian Charism. Some years earlier, Maria had chanced upon the exhibition and immediately embraced the possibility of hosting it in and around Glasgow. She realized it could be an accompaniment to the eucharistic evangelization mission already being undertaken.

She went on to discuss her ideas with Fr. Peter Dowling SSS who affirmed that he liked and approved of the proposal. Br. Raj who is undertaking his ministry apprenticeship in Glasgow co-led the project with Maria as part of his ongoing initial formation.

During Covid restrictions our weekly team meetings continued on Zoom with Fr Darren hosting the proceedings. When lockdown was eased the team met at St. Columba’s on Monday evenings to discuss pertinent points regarding the organization and practicalities of the exhibition. Coinciding with COP26 it was decided that the exhibition would be our contribution along with hosting a Night Fever, which was to be held in Glasgow Cathedral on Saturday 6th November at exactly the same time world delegates were in the city for the climate conference. With the world on your doorstep, now was the time to incarnate everything that we had planned.

Maria immediately set about contacting The Carlo Acutis Foundation website, and eventually received an answer from Anna Johnstone, the governess to Bl. Carlo's younger brother and sister from 2015 to 2018, to explore the logistics of hosting Carlo’s exhibition in Glasgow. Without hesitation Anna agreed and duly dispatched 29 posters which she thought would be best to display for our initial purposes. On receipt of the posters, it was immediately obvious that some form of stand would be required if the posters were to be displayed to their full advantage both for transportation and viewing by the general public. The gloss heavy duty paper although very attractive was not durable and could be easily damaged in transit.

Brother Raj suggested that a photo of each poster be taken and downloaded via his iPad and forwarded to each member’s mobile phone. This ensured that everyone could familiarize themselves over the next couple of months with all of the miracles we were to exhibit. Slowly we were growing more competent in how to exhibit God’s work. I had suggested that my son Paul could be on hand to offer some assistance as he is employed in the photocopying industry. He could advise us on the best choice of posters, publicity, and printed support material such as prayer cards. I was delighted how Paul became so integrated into this evolving and exciting project animated by St. Eymard’s family in Scotland.

Motherwell based media group Sancta Familia interviewed Maria, Fr. Darren, and James as part of the project. This video was then circulated among the Catholic population in Scotland and subscribers worldwide. This gave a tremendous opportunity to increase awareness of the Eymard family here in Scotland. [See International Eucharistic Miracle Exhibition by Blessed Carlo Acutis in Glasgow - YouTube]

A video of Bl. Carlo Acutis’ life with subtitles was purchased and subsequently played as a backdrop to the Exhibition. We exhibited at both Glasgow University’s Catholic Chaplaincy and our new SSS parish at St. Columba’s and so an itinerary of events was published that included masses, benediction, confession, and periods of public adoration. Fr. Darren gave daily public talks inspired by Bl. Carlo’s simple teachings and weaved into St. Peter Julian’s eucharistic insights. Young people from the Congregation’s Eurocamp and students from the University provided music for the liturgies.

Maria came up trumps by suggesting that we ask Anna's help to procure a small relic of Bl. Carlo that would accompany the exhibition. Finally it was arranged and so Maria, Eleanor, and Br. Raj travelled to Assisi to the church of Santa Maria Maggiore where they were met by Sister Francesca at the Santuario della Spogliazione where she handed the first-class relic, comprising some of Bl. Carlo's hair to Br. Raj. It has to be said that there is usually a long wait for this type of relic. Surely, Bl. Carlo was with the Eymard family all the way as we launched on November 4th and ministered to many who were both fascinated and curious alike!"

Cathleen’s recollections reveal that 2021 brought to light a tremendous, focused project that was animated in Glasgow during a major international event. More importantly, by working weekly together in both in-person and online spheres, we came to realize anew that Fr. Eymard’s instincts about ministry and discovering creative ways to proclaim the reign of God in the Eucharist needs the company of each other. Just like St. Peter Julian Eymard and Bl. Carlo Acutis who identified with Jesus most readily in the Cenacle, the scriptural testimony remains that nobody is ever alone in that place, and neither should any ministry that is inspired by it!

Last modified on Friday, 28 January 2022 14:48
Tweet
Published in News
More in this category: « Pagudpud community is canonically erected AGGREGATION OF THE BLESSED SACRAMENT at Santa Maria di Piazza in Turin »
back to top