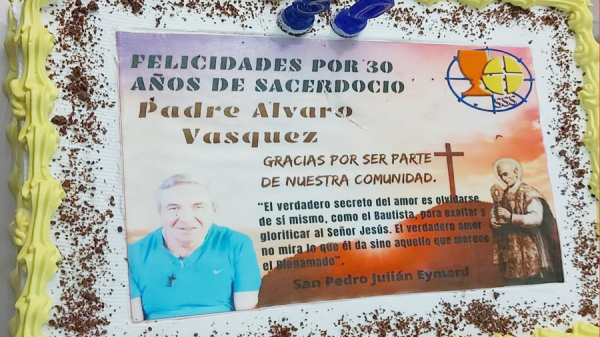 It is a time of grace to celebrate 30 years in serving the Church in the Congregation of the Blessed Sacrament. There are so many experiences, amid different “earthquakes" (changes of place, of mission), in which I have lived this service despite my unworthiness, as St. Peter-Julian Eymard recalled.

This path began in the city of Bogota, when as a recently ordained a priest in the La Paz neighbourhood in the south of the city, I lived for four years, accompanying this poor area discovering how to interpret the hunger of the people, experiencing satisfaction for the duty fulfilled.

In this path, I add the tenacity of Fr Lucinio Martin Herrero SSS, who accompanied the communities of the Fiscala, the Blue Danube, La Paz, Molinos 1 and 2, and Diana Turbay, all located in the south of the city of Bogota. I was helped by pastoral workers who were especially dedicated where my godparents of perpetual vows came from, Mrs. Carmen and Don Manuel. At the Danubio, my diaconal ordination took place, whereas my priestly ordination was in the Corpus Christi parish. My first Eucharist was in the newly built chapel of the La Paz neighbourhood and then in the parish of San Joaquín de las Ferias, which has pleasant memories for me regarding this parish and the Blessed Sacrament vocational community. 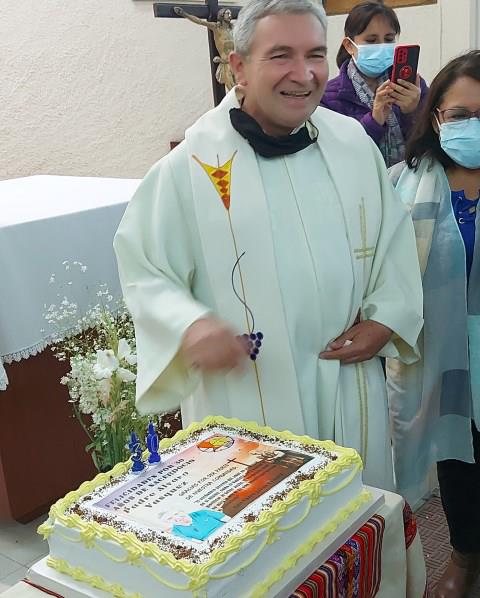 Then nine intense years of vocational promotion began from the North to the South of Colombia. I travelled around Santander, Boyaca, Los Llanos Orientales, Nunchia and Tamara in the region of Casanare, Antioquia, and some indigenous areas with the Lauritas Missionaries at the Magdalena River on the border with Mompos. I had different mission experiences, with religious communities, and the archdioceses of Medellín, Manizales, Popayan, Cali de Pereira and Armenia. Of course, I took part in some meetings of the Congregation, such as the General Chapter in the year ’93 in Rome. These were unique experiences of celebration in my life together with exchange of views then in 2005 within the framework of the 33rd General Chapter in Lyons, France, where I was able to participate in Eucharistic Masses with the intercultural atmosphere of brothers from the five continents, which was a gift to my experience of my priestly life. I recall a Eucharistic celebration at the Shrine of the Miraculous Medal with some brothers from Senegal, Ireland, Vietnam, Brazil, the Philippines. It was a true Pentecost where each one shared his experience of the Virgin Mary in his life and its meaning in his personal, congregational and priestly path. This was one of the undeserved gifts among so many that the Lord has given me.

At the level of the Congregation I have felt very much the departure of brothers, such as Fathers Martin Goicochea SSS, Segundo Urquia SSS, Luciano Olea SSS and now José Miguel Larrañaga SSS and Antonio Odriozola SSS, as well as the departure of Brother Leonidas Belanger SSS, a true witness of fraternity, humility, simplicity, poverty and surrender of his own roots by wanting to die here in Peru. In fact, he and Father Miguel Parets are two brothers who fill the Shrine of San Martin of the Diocese of Chosica with holiness.

In Peru 2000 to 2009 was a missionary period of promotion and vocational animation in the lands of Junín, Huánuco, Huancayo and Oxapampa, places where I had different missions. My four years spent as a theologian companion with a special intercultural accent with brothers from Colombia, Brazil, Argentina and Chile have had their particular resonance in my priestly life and in different Eucharistic missions that I was able to carry out until 2014. I was asked to lead the parish of Our Lady of Loreto, characterized by the animation of small communities across about nine sectors, where with the leadership of Father Lucinio Martin, my formator and companion on the way in various places of mission, a particular emphasis was placed on the evangelizing, sacramental, social and liturgical dimension.

In 2018, I returned to Lima to live here in Canto Chico with Father Camille Gagnon and Deacon Julian Cano. At this time of the Covid-19 pandemic, I thank the Lord for my ministry that has been strengthened every day with incredible blessings that have allowed, online and in person: a better pastoral care of the teams for evangelization in the sacramental aspect, family catechesis with three centres, and also for Confirmation, the setting up of significant humanitarian emergency teams with a growth of youth volunteers for the nine communities, the support of the popular religiosity of devotion to the Lord of Miracles and Saint Martin de Porres. I believe my option is clear for the poor, for the youth ministry and mission project of the Congregation, during these 30 years of priestly service and my almost 40 years of service in the Congregation.

I thank God for all the brothers who have trusted in my attempt to live humbly each step that the Lord has asked of me in my life, which has been full of small interior ‘earthquakes’, each change entailing ruptures and enduring the respective mourning and re-adaptation to each Blessed Sacrament community. Sincerely.

Last modified on Friday, 28 January 2022 15:09
Tweet
Published in News
More in this category: « HISTORY: Foundation of the Congregation in Habana-Cuba Provincial/Regional Chapters - 2022 »
back to top