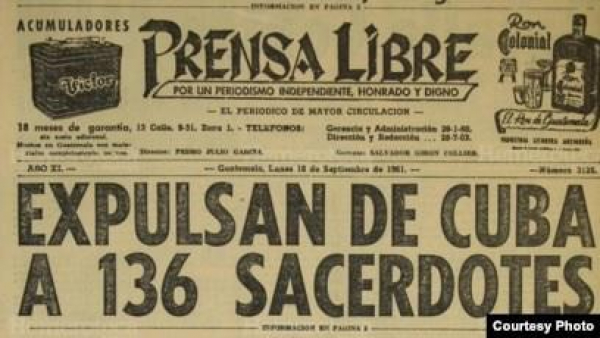 "Havana lacks a History (...) the oldest ones invent another story, a lie, as it should be (...) between Havana-that-does-not-exist and Havana-a-paradise-lost."

And the last Blessed Sacrament religious? On July 16, Fathers Segundo Urquía and Martín Gorostidi remained at the Bejucal residence. Both were very valuable, the former to take care of worship in the chapel itself and the other to attend to the chaplaincy and provide service of organist in the church of Jesus of Miramar.

One day, when Fr Segundo was vested in the sacristy about to go out to celebrate Mass, a band of soldiers approached him and said to him: “Are you Segundo Urquía?” He replied: “Yes.” He was told: “Leave everything on the table and continue with us.” He sought permission to take a Breviary and a change of clothes, but they would not let him take anything with him. “Follow us,” they told him. They put him in a vehicle and took him to the port of Havana where a transatlantic liner of Spanish nationality was ready to set sail for Spain.

The same day, in the morning, Fr Gorostidi took a bus and went to Jesús de Miramar, since he had an appointment as an organist. When the bus stopped in front of the church of the Capuchin Fathers, another group of soldiers asked for Martín Gorostidi. He identified himself and they told him to get on a bus that made its way through Havana, and after traveling all day at nightfall reached the same ship on which, since morning, Fr Segundo had been on board. There were more than a hundred passengers, most of them priests and religious, including the Auxiliary Bishop of Havana, Msgr. Boza Masvidal, who were being deported to Spain. In the city of Vigo, the ecclesiastical and civil authorities warmly welcomed them.

Thus ends the story of the Foundation of Habana.