Frascati 1971: 50 years since the redaction of the Rule of Life 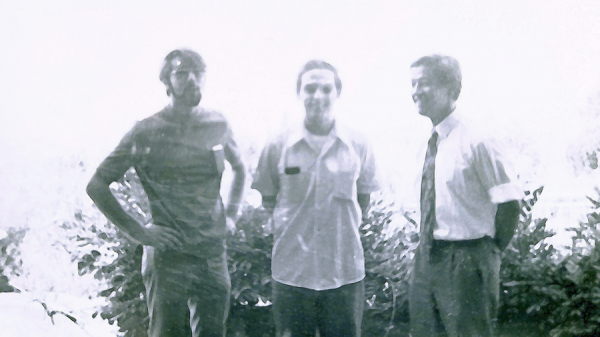 I found this photo. We are the three scholastics who were elected to be members of the second session of the Chapter for the Renewal of the Constitutions that took place in Frascati, near Rome in the month of August 1971.

I am on the left, the tallest and thinnest, Camille Gagnon from Saint John the Baptist Province in Canada. In the centre is Donald Pelotte, from Saint Ann Province of the United States. Ben Janssen from Saint Joseph Province of Holland is on the right. We were elected at an international meeting of scholastics held in Duren, Germany, a month before the celebration of this Chapter.

Ben Janssen, after engaging in intense pastoral work, mainly in publications, could not survive the crisis of celibacy and left the Congregation.

Donald became Provincial of the Saint Ann Province and during his tenure he was appointed as the bishop of the Diocese of Gallup, New Mexico. He is said to have been the first Native American bishop in the United States. His roots were from the Abenaki tribe. Due to health problems he had to resign as bishop. He died in the year 2010.

And I still remain. After seventeen years of intense work in my Province of Saint John the Baptist, I could not resist the attraction of South America, especially in the peripheries of Lima. I have been here for thirty-four years in the Saint John XXIII Province.

I have dedicated my body and soul to living this time of transition and renewal. I have drawn up a formation course for the scholastics that I have given three times; it is called “From the Constitutions to the Rule of Life”, consisting of about five sessions. I identify with the Rule of Life.

This photo above is from the archives... But more than anything, it reminds me of this long journey with the Congregation, consisting of more than fifty-seven years of searching, happiness, Eucharistic inspiration, not without failures as well, and of gratitude for being a religious of the Blessed Sacrament.

Last modified on Friday, 29 April 2022 08:25
Tweet
Published in News
More in this category: « XXVth Chapter of the Province “Our Lady of the Bl. Sacrament” Collection: Bread for the Journey - Selected Texts of Saint Peter-Julian Eymard »
back to top