Events in Mozambique starting from 31 July 2022 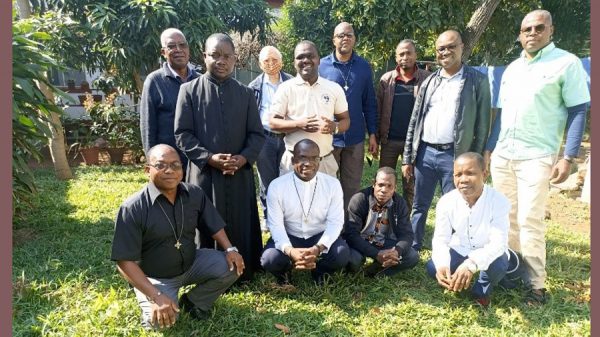 1) – FEAST OF THE PATRONS SAINTS JOACHIM AND ANNE

The 26th of July is the feast of Saints Joachim and Anne, the parents of Our Lady. They were God’s precious instrument in fulfilling his promises made to Abraham. The parents of the Virgin Mary perfectly carried out their role as educators in preparing their daughter for a special mission of bringing to birth the Son of God. As a consequent on this feast all grandparents are remembered at the parish of Saints Anne and Joachim that celebrated this feast on 31 July 2022. See the images.

Parish of Saint Anne of Munhuana

Parish of Saint Joachim, Feast of the Holy Patron

A moment of sharing experiences during the meal of the day
on the occasion of the feast of the patron Saint Anne with all the SSS Fathers:
Constancio Cornelio, César José, Félix Tupasso, Geraldo Uaiare, Bartolomeu Bravo,
Vasco Sitoe, Humberto Kuijpers, Silvério Ernesto and Mateus Patricio.

When the sun rose it seemed a lie, but it was true, for on 1 August 2022 Father Humberto released his book bearing the title “Œuvre Inachevée” (An Unfinished Work). This date was appropriate since it is the day of the death of our Founder Saint Peter-Julian Eymard, Apostle of the Eucharist. Father Humberto said: “Father Eymard's dreams are still alive and current”.

Many faithful of the Parish of Saint Anne of Munhuana were present that day when the work was launched.

The book was presented by Reverend Father Agostinho Maholele, sss, a General Consultor who arrived from the school of formators in Momemo-Maputo.

The icon of Our Lady of the Blessed Sacrament above, is a copy of it from the S. Peter-Julian Eymard House in Maputo-Mozambique. It used to be in the SSS novitiate in Baarlo, Holland, in the ’sixties of the 20th century, but when this place had another owner, because of this change and other factors the icon completely disappeared.

Father Agostinho sss, Father Humberto sss and some seminarians of the SSS House

On 2 August in Maputo, all the members of the SSS Community of Mozambique were gathered to begin the retreat, which was guided by Father Agostinho Maholele, a General Consultor. The retreat lasting four days was very important and fruitful. It was a time of pausing from activities to seek much reflection and spiritual energy for the mission.

This was a retreat of revitalization, during which we reflected on the life of our Congregation and on the pastoral care of our parishes: Saints Anne, Joachim, and John de Brito. Certain questions from the Rule of Life were the focus of this annual retreat for SSS religious in Mozambique. The pictures speak for themselves.

We are grateful to the Lord who accompanied us during these days, marked by feasts of the holy patrons, Saints Joachim and Anne, the launching of the book titled “Œuvre Inachevée” and the four days of a retreat for spiritual renewal.

May Our Lady of the Blessed Sacrament and Saint Peter-Julian Eymard, our Founder, intercede for us to follow the Apostle of the Eucharist par excellence.