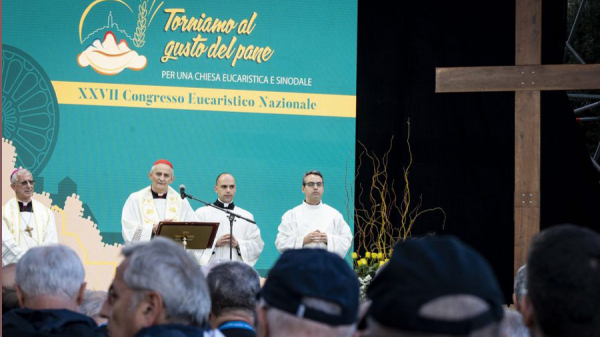 This choice was motivated by a tradition, that of bread, which in a Eucharistic key enabled seeing and living the Congress.

In its own small way, Matera issued the invitation: “Come away by yourselves to a lonely place, and rest a while” (cf. Mk 6:31), come and be amazed and rediscover the silence that echoes and dwells in the ancient caves of stones, come to return to the taste of daily bread and Eucharistic bread.

About 1800 people, including bishops, delegates, and pilgrims, representing dioceses and regions from all over Italy, responded to the invitation.

The Eucharistic Congress of Matera was conceived as a contemplative stage of the synodal journey, that of a Church listening to the signs of the times, to the voice of the different situations of the Christian community.

In the spirit of synodality, the mornings of the Congress were arranged. Participants, divided into the ten parishes of the city, celebrated the Eucharist, listened to the meditation held in the cathedral, and later, after a time of personal reflection, could to share their experiences in small groups. At the end of the morning there was sharing, welcoming someone bearing witness and lunch.

The slogan of the Congress, “Let us return to the taste of bread”, became full of ideas springing from the biblical, human, earthly and spiritual symbolism of bread.

Gently guided of the bishop of Mantua, Msgr. Gianmarco Busca, we lived the journey of bread, by passing from table to table.

Bread is the fruit of the earth, it is offered to us on the table of creation. Bread reminds us of the table at home, where living together we learn the art of authentic relationships. Bread then suggests us to the altar table where we find Christ who welcomes everyone and makes himself forgiveness, food, gift of love that makes everyone into one body. The altar table extends across the table of the world, bread is the bread of companions (from the Latin: cum - panis) and of service. Nourished by the bread of the altar we learn to sit at other tables, those of all places where human beings live, struggle, suffer, rejoice But the altar table also points towards the table of the Kingdom, bread stirring up an impatient desire for the final embrace, for that table where the Son of man will gird himself and come to serve us. It is on that table defying the drama of death, where we receive the “super-substantial” bread giving meaning and substance to every aspect and every moment of human life’s journey. 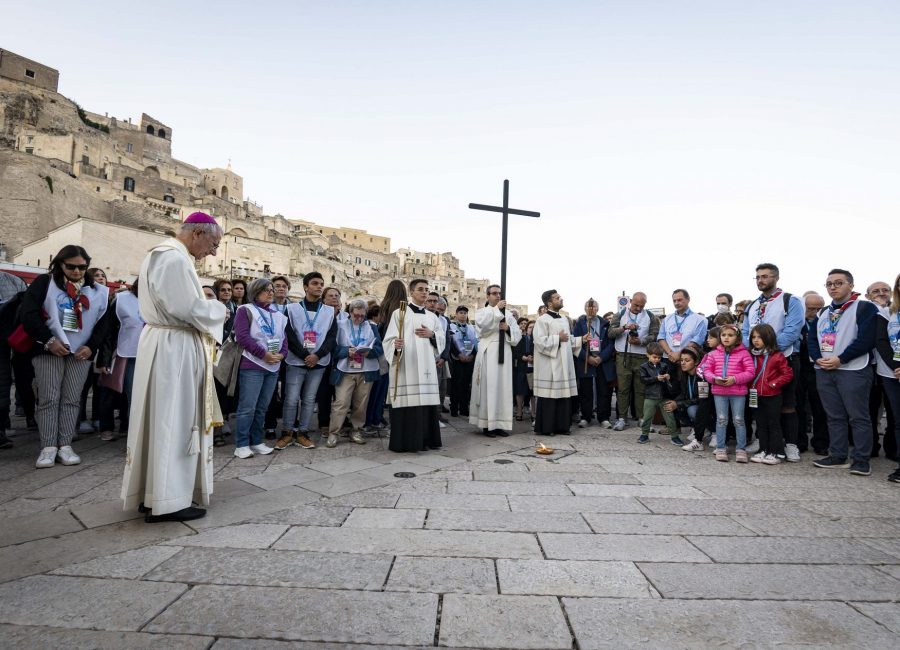 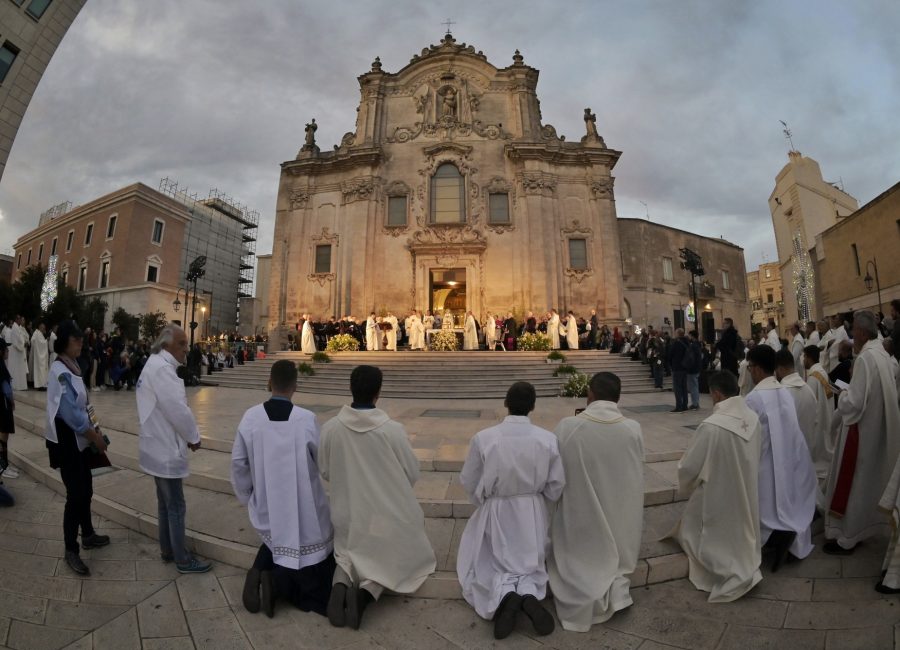 The secret of this journey consists in never separating the tables, and clearly realising that the altar table provides the crucial passage.

This beautiful journey from table to table was brought out well by Prof. Giuseppina De Simone, who described the intertwining of the history of bread and the history of humanity. The significance of bread crosses the centuries and time, and in Jesus’ gesture it is as if summerised and transfigured.

The sacramental Eucharistic bread establishes us in that relationship with God which is the foundation of all relationships. It is the Eucharist that makes possible to realise ecclesial communion, our being Church.

In the contemplative pause at Matera, there were always brought before the Eucharist the sufferings of the contemporary world, the difficult recovery after the pandemic, the war in Ukraine, the economic difficulties of Italian businesses and families, and those who disembark on our shores.

With the taste of bread, we rediscovered how to appreciate the liturgy and life, the beauty of the Eucharist, of the Church, of the ecclesial community, which brings to the altar the joys and struggles of everyday life, by listening to the Word and breaking the bread. and caring for the poor.

The timetable of the Congress well arranged, enabling us to walk around and thus get to know the city of Matera better. Enormous congratulations are due to the organisation as well as heartfelt gratitude to the volunteers who, like guardian angels, always appeared available at the right moment. 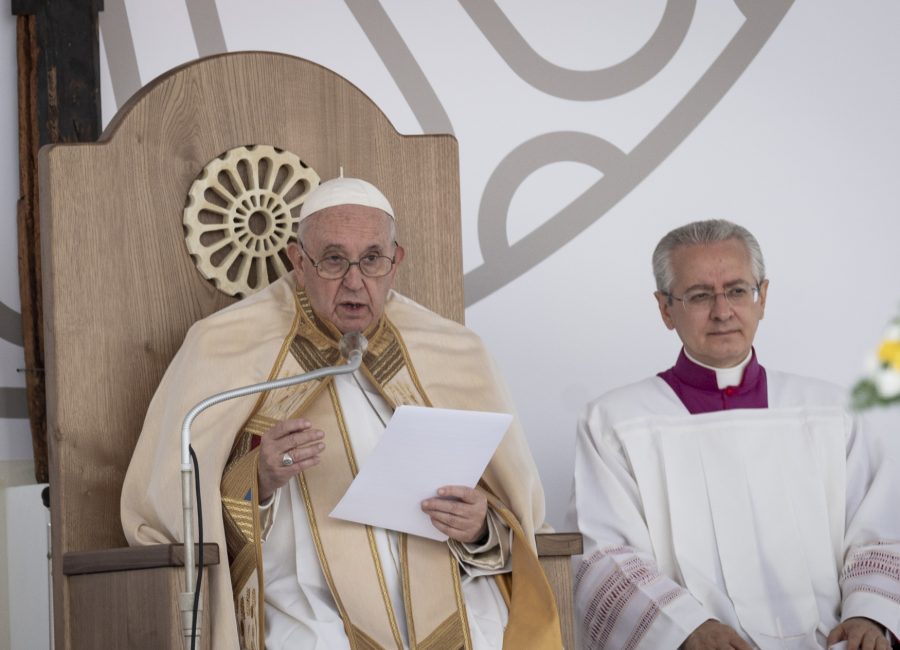 The climax of the Congress was on Sunday with the presence of Pope Francis, who was welcomed by between 12/13 thousand people filling the Matera stadium.

Pope Francis, taking his cue from the parable of the rich man and poor Lazarus, recalled emphatically how the bread that God gives us is not always shared on the table of the world, that it does not always have the savour of communion and it is not always broken to foster justice. He impelled everyone to become converted: from indifference to compassion, from waste to sharing, from selfishness to love, from individualism to fraternity.

The churches in Italy take up again the journey with a strong message that has its starting point in everyday life. We need bread, that of our humanity and that of the Eucharist, to face the historical, difficult, and painful time that our generations are experiencing. Precisely at this time it is more than ever necessary to return to breaking the bread of solidarity, of sharing, to rediscover the taste of bread in order to be apostles of fraternity and to become the bread of tenderness and mercy, bread of hope and joy for all.