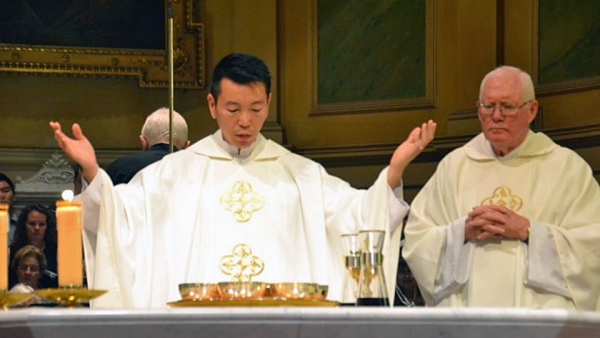 The feast of Jesus Christ, King of the Universe, brings the church’s Sunday cycle of worship to a joyful close. At St Francis’ Church in Melbourne this year the festivities occupied the whole weekend. 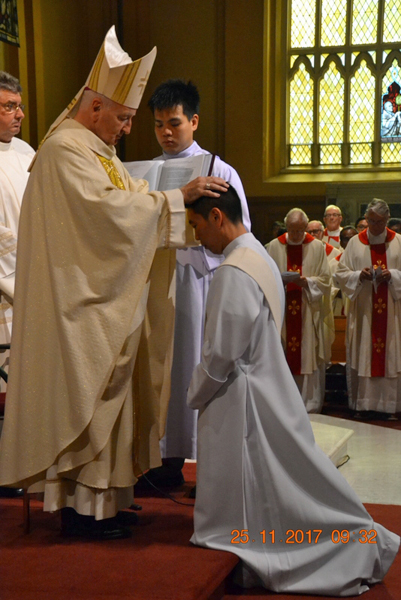 On the morning of Saturday 25th November 2017 a full church of confreres, family members, friends, associates and St Francis’ regulars witnessed Bishop Terry Curtin ordain Deacon Ben Ho SSS to the priesthood. Ben is the first member of the Australian Province to be ordained a priest for nearly 20 years, the last being Boris Perlaki in August 1998. No wonder it was the occasion of much rejoicing. Members of St Francis’ Choir and St Francis’ Youth Choir, in combination with brass and organ, made hearts and voices soar.

In a striking homily Bishop Terry focussed on weakness as the heart of priesthood. Citing the letter to the Hebrews (2:18; 4:15; 5:2), he observed that “there is an innate link between priesthood and weakness which is not a threat but of the essence”. Thus “Jesus of Nazareth was a priest – ambiguous, suffering, mysterious and salvific”.

Weakness, he said, connects us to others and to God. “It allows us to feel with [others] the human condition, the human struggles and darkness and anguish which call out for salvation”. And it “relates us to God more deeply, because it brings us into the place in which his grace can be seen, in which his sustaining presence can reveal itself”.

The joy of the church service carried over into the luncheon served in the Pastoral Centre by devoted staff members and hospitality volunteers. Their cheerful generosity over the whole weekend was an inspiration.

The spirit of praise and thanks did not abate on the Sunday morning, buoyed as it was by a tide of marvellous music. Former members returned for their annual performance with St Francis’ Choir to sing Haydn’s glorious “Mass in Time of War”. The augmented ensemble was complemented by four soloists and accompanied by the organ and Symphonia of Melbourne. 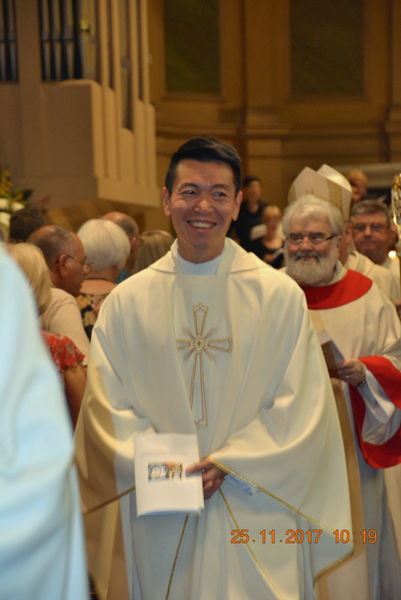 Fr Ben was proudly assisted at the altar by Graeme Duro, Director of Formation. Time (perhaps to Ben’s relief!) permitted only a short homily on Jesus’ parable of the sheep and goats at the end of time. What mattered, Ben said, was how well we made use of our time now.

A contingent of Ben’s family travelled from Singapore to join him for the weekend: his parents, John and Irene, several aunts, and his brother and wife and three children. John and Irene rightly played a significant role in the liturgies of both days.

Just before Fr Ben blessed and dismissed the assembly from his first eucharist, the Director of Music at the church, Tony Way, had a few words to say. He drew everyone’s attention to two significant features of the day’s celebration.

The first was the new beginning that Ben’s ordination meant for the Blessed Sacrament Congregation in Australia and for St Francis’. The second was the final appearance of Tony’s predecessor, Roger Heagney, as guest conductor at the 11.00 am Sunday choral eucharist. This brought to a close Roger’s extraordinary fifty-year contribution to the musical life of St Francis’. How fitting that one splendid example of service should finish just as another gets under way. May this inspirational weekend draw a stream of new members into the Province’s eucharistic life and mission.

Last modified on Friday, 15 December 2017 23:24
Tweet
Published in News
More in this category: « Servitium Christi in Vietnam Priestly Ordinations in Vietnam »
back to top