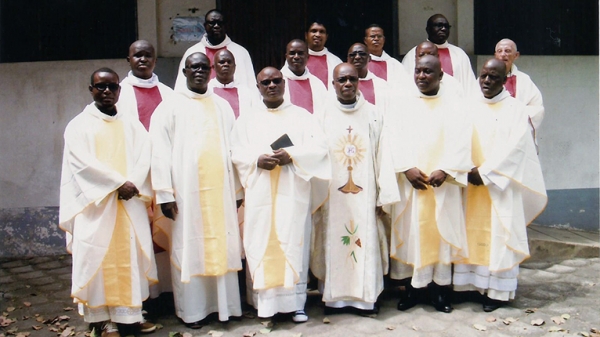 The Region Cardinal Emile Biayenda, a part of the Congregation of the Blessed Sacrament of the Province Jean-Baptiste of Canada, celebrated its 3rd Regional Chapter from February 7 to 11, 2018.

Fathers Martin Boukar Tine, the Vicar General, and Philip Benzy Romician, the General Treasurer, were invited for their prayers and various contributions. At this Chapter 17 religious were present from the Congolese territory of Brazzaville. Four days were for some members not enough and for others were too long. However, these four days were quite full.

The Chapter began with a number of messages. The first of these came from the Superior General transmitted by Father Martin Boukar Tine for the welcome of the local superior of the community. This was followed by the message from the Provincial Superior read by Father Elois Manima, a Regional Consultor and Secretary. Finally, there was the discourse of the Regional Superior, who officially opened the proceedings.

Group work constituted intense moments with debates and sharing filled with hope for the fruitful future of the Region.

The capitulars were impressed by the intervention of Father Philip Benzy Romician, the General Treasurer, regarding the management and understanding of a budget.

On Saturday the report about the Cameroons was given by Father Nicaise Milandou-Semo, one of the religious present from there. After his presentation both a certain fear and hope was experienced. The path will surely have difficulties, but it is important to go forward despite all.

Rain accompanied the end of the work and the day. Glad to have gathered for four days, the capitulars had supper at the bank of the Congo river. On Sunday morning, February 11, 2018, Father Martin Boukar Tine, the Vicar General, presided at a Mass to close the Chapter work. The new Regional Council was introduced to the faithful present at the Eucharist and sent on its mission. Under the inspiration of St Peter-Julian Eymard, a new mission was launched.

We recall that on the eve of undertaking the work of the 3rd Regional Chapter there was the blessing and inauguration of the new building of the Eucharistic Centre in which the capitulars were lodged.

This new building of the Eucharistic Centre has been financed entirely by the Province St Jean-Baptiste of Canada and it will serve at the same time as a place of welcome for sss scholastics of the African Conference (CA) to prepare them for perpetual vows.

May the Virgin Mary, the Eucharistic Mother intercede for the Cardinal Emile Biayenda Region.