Appointment of the Bishop of Kaolack (Senegal) 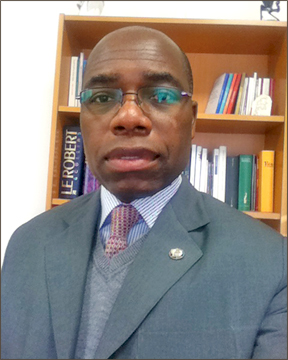 The Holy Father has appointed Bishop of Kaolack (Senegal) the Rev. Fr. Martin Boucar Tine, S.S.S., who is currently Vicar General of the Congregation of the Blessed Sacrament.

Martin Boucar Tine, S.S.S., was born on 16 September 1966 in Koudiadiène (diocese of Thiès). After attending the minor seminary of Ngasobil, diocese of Thiès, he began his religious formation at the Sacraments Fathers, Collège Saint Gabriel in Thiès and Collège Sacré-Cœur in Dakar, at the same time following his philosophical studies at the Center Saint Augustine. He carried out his novitiate in Lonzo, Democratic Republic of Congo, earning a Baccalaureate in Theology at the Theologat Saint Eugène de Mazenod of Kinshasa and then a Licentiate in Dogmatic Theology at the Faculté Catholique of Kinshasa. He made his perpetual vows in Koudiadiène on October 6, 1995. He received his priestly ordination on July 6, 1996.