Launching the Programme of Preparation for Perpetual Profession (P4) 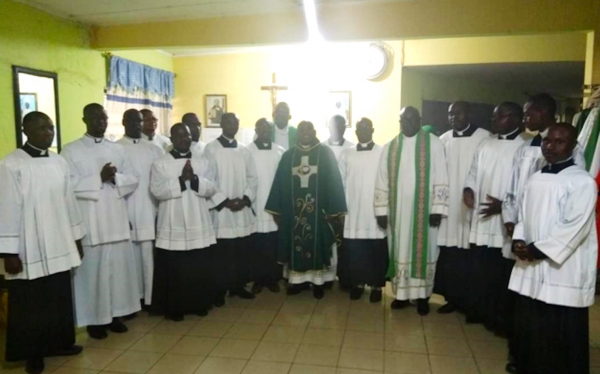 This is how it began, the tone being set and the gong being sounded, when while presiding at the celebration of the Eucharist on Sunday 15 July 2018 with a light breeze in the parish of St Peter Claver of Bacongo in Brazzaville Father Brel Daouda Malela, the Regional Superior of the Cardinal Emile Biayenda, opened the Programme of Preparation for Perpetual Profession (P4) by sending some disciples out on mission.

In his words of introduction by way of introducing the people of God about the remarkable unusual presence of the scholastics at the altar, all vested in white, Father Brel said: “(...) having completed their academic formation, these young brothers are about to plunge into eymardian spirituality before entering the pastoral field. For three months they will experience the riches of God’s real and active presence in the Holy Eucharist in order to become through following our Father Founder diligent and committed disciples-apostles. This is a difficult exercise that only faith refines and strengthens (...) so that the missionary flame be ceaselessly enkindled in them.”

In his homily, the Regional Superior shared his understanding about mission, which constantly and always pertains to the mission of Christ, who “entrusts his saving activity on earth to his own, to his Church, in every era and place so that it may be perpetuated. This mission in every aspect, he continued saying, consists in becoming converted, to change one’s life, one’s attitudes. To proclaim the Gospel to others, the meaning of mission, is our mission. But we have to fulfill this mission in ourselves first, before carrying it out to others. For, it is up to us, first of all, to be convinced of what Christ tells us and what we must do to explain it better to others and to convince them.”

To be convinced about the mission! This is what the sixteen young men will be endeavouring to live in the course of three months, by means of mediation, inner silence, being immersed – as one would put it – in order to emerge from it well equipped to “fight the good fight” entailed by the mission.

The places of origin of these sixteen young brothers are as follows: 4 from Congo Brazzaville, 4 from Mozambique, 3 from Senegal, 3 from Uganda and 2 from the Democratic Republic of the Congo. Their director of the P4 is Father Jean Jacques Nkodia and the treasurer is Father Rodolphe Mboya.

We look forward to singing the Te Deum enthusiastically at the end of their formation.

Let us support them by our prayers.

Tweet
Published in News
More in this category: « Pilgrimage in the footsteps of Father Eymard Sacramentinos' Sharing and Shaping of a Eucharistic Life »
back to top