Sacramentinos' Sharing and Shaping of a Eucharistic Life 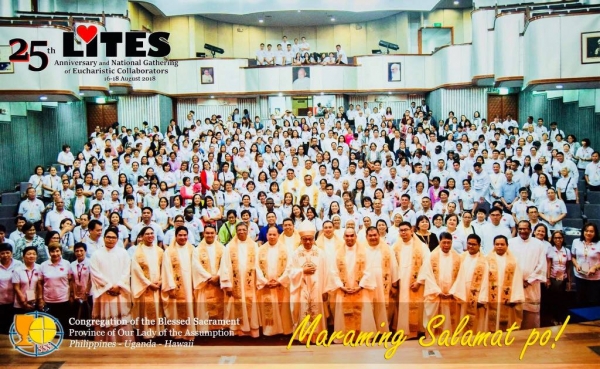 IT WAS IN 1957 that the Religious of the Congregation of the Blessed Sacrament plunged themselves into this endeavor of sharing and shaping a eucharistic life in the fabric of Filipino lifestyle.

His Eminence Rufino J. Cardinal Santos, D.D. forged a Decree of Transfer of Administration of the Parish of Sta. Cruz (Our Lady of the Pillar) to the Congregation of the Blessed Sacrament (Patris Eymard) and commissioned the Rt. Rev. Msgr. Narciso Gatpayad (Vicar Forane) to install Rev. Fr. Rosaire Morin, SSS, as the new Parish Priest of Sta. Cruz on August 15, 1957. Henceforward, the Congregation never failed to supply foreign SSS religious to the Philippine Foundation until that fateful year of 1992 when the local SSS religious are given the opportunity to hold the helm of the eucharistic mission.

The Eucharistic Associations, from 1957 to 1967 and 1967 to 1993, were characterized by the way our earlier SSS Fathers and Brothers had endeavored it. Thus, the Eucharistic landscape, celebration, and contemplation of the Eucharist were introduced and continue to thrive to this day.

The Guard of Honor Society for Women is not assigned a definite hour during the month. Each woman is free to choose any hour at her convenience. The men, however, are assigned hours from 08:00 in the evening to 12:00 midnight at Sta. Cruz Church. All the members should live a life in harmony with their calling as an adorer, i.e., attend Holy Mass and receive Holy Communion frequently and participate in other liturgical ceremonies of their parish church.

There is also the EUCHARISTIC WEEKS ASSOCIATION. This is the second branch of the Association of the Most Blessed Sacrament. The members devote themselves four times a year, one entire week of intense Eucharistic service to our Lord in the Blessed Sacrament. Furthermore, members make a fixed contribution to help defray the cost of flowers and candles for exposition. The members must offer one’s personal life to the Lord, besides the monetary offering.

The third and highest branch of the Association of the Most Blessed Sacrament is the EUCHARISTIC FRATERNITY. The members must resolve to adore every day or at least once a week, celebrate daily Holy Mass, frequent reception of Holy Communion, eucharistic works, attending monthly meetings and living a life reflective of a renewed spirit after time spent before the Blessed Sacrament. When Fr. Godfrey Spiekman, SSS, then Superior General, visited the Philippines, he reported some high praises for the Manila Foundation, specifically mentioning the faithful’s enthusiasm for the Eucharistic Associations as indicated by the great number of members.

Then, Martial Law was declared, and a curfew was imposed. This gave the Nocturnal Adoration some kind of restriction to the detriment of the lay participation. Likewise, there was the development in local parishes where the parishioners are obligated to participate within their respective parish jurisdiction. Although, the participation of adorers in Sta. Cruz Parish dwindled, the SSS ventured on to other aspects of Parish Life that shapes its activities, like strengthening the Basic Ecclesial (Eucharistic) Communities, the Bible Apostolates, and Catechesis.

On the 10th year of the SSS Philippine Foundation, due to the liturgical changes brought about by Vatican II, the Blessed Sacrament would henceforth be reposed during the celebration of the Mass. As the late Rev. Fr. Daniel A. Roach, SSS, commented, this change meant “a comprehensive restructuring of the ideas which had, up to this time, regulated the life of the Congregation in its interior structure and, to a large extent, the apostolic effort which had been undertaken.” With all the realities mentioned above, the Eucharistic Associations are now known as MENS EUCHARISTIC LEAGUE (MEL), WOMENS EUCHARISTIC LEAGUE (WEL), EUCHARISTIC FRATERNITY (EF), and PEOPLE’S EUCHARISTIC LEAGUE (PEL).

Towards the end of 1993, the nascent SSS Philippine Province, through the New Provincial Superior Rev. Fr. Honorio “Nory” Vasquez, invited Rev. Fr. Robert “Bob” Rousseau, SSS, (of Saint Ann Province) to the country to share the Eucharistic apostolate he has designed, known as Life in the Eucharist Seminar (LITES). Our religious and lay partners in Manila and Davao were given the LITES from where LOCAL ANIMATION TEAMS were formed to re-echo and adapt the LITES module for the benefit of other parishes and groups. An adaptation of this seminar for the youth was also introduced, the Kabataan- LITES (K-LITES). LITE Congresses have been held each year both in Davao and in Manila for all the seminar graduates in order TO REKINDLE THE ZEAL OF COMMITMENT TO JESUS DISCOVERED AND LOVED IN THE EUCHARIST AND EXPERIENCED IN THE COMMUNITY THAT BREAKS BREAD TOGETHER.

On this Year of the Clergy and Consecrated Persons, this Congress is the culminating activity of the POLA’s 60th Year Anniversary and part of its 25th Year of elevation as Province. The occasion aims to renew and relive the commitment of the religious and lay collaborators to the mission of Eucharistic Evangelization.

Last modified on Wednesday, 22 August 2018 13:34
Tweet
Published in News
More in this category: « Launching the Programme of Preparation for Perpetual Profession (P4) Eight Ordained Deacons in Vietnam »
back to top