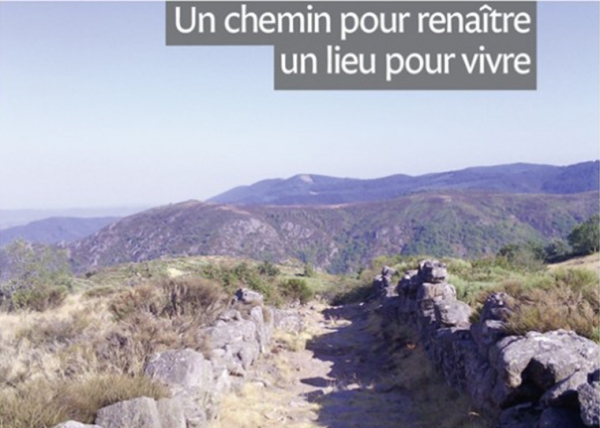 Four more families joined the Beguinage. The group is very diversified, nationality, ages, marital and social conditions. It is happy and dynamic, in particular for the animation of the children and the choir during the mass. Beautiful surprise, the architect who carried out the Beguinage comes to live there with his family. Full with dynamism, he has a new plan within the framework of his association “Habitat and Humanism”: the installation of two hundred caravans, called « Moving Nest », in the city, with a social accompaniment, for the most fragile homeless people.

The history of La Viale started in 1968. We celebrated this 50th anniversary, first in Brussels, then on August the 6th, on the Feast of the Transfiguration, in Lozere-France: a Eucharist with the apostolic administrator of the diocese of Mende, the Socius of the Jesuit Provincial, and many guests, several of them being old acquaintances in the country, a festive meal and a power point presenting the three other places of La Viale in Belgium. It was a joy during these summer months to meet again former friends of La Viale finding the way back to the village after 20, 30, 40 or 50 years.

In an hour and twenty minutes, the article must leave. No idea of the topic for the SSS publication. An idea springs to mind: this morning’s Mass. On Sunday at 10 a.m. we had Mass in our church. On average, between 40 and 65 faithful are present. This morning, 19 August 2018, still has a holiday atmosphere. The “stalwarts” are present.

Last Sunday, at the end of the Mass, a lady, former Protestant who was received into the Catholic Church 4 months ago, asked me for an appointment. An hour of conversation took place about the question: “In Communion do we really receive Christ’s Body and Blood? Do we really eat his flesh?” This was the theme of this morning’s sermon, which wonderfully was suggested by the readings for the 20th Sunday!

Towards our missions in Africa, for which expenses for the chapel are sometimes shared, we easily request our “parishioners” to contribute. For this, there are also other donations. As I had not yet made an appeal on this particular morning for this, I proposed just one thing to the people present: “To help the family who entirely lost everything!” This was because during this week, and for the third time in 25 years, a farm in the territory of one of our parishes had been entirely burnt down and at night 56 cows were trapped in the flames. The response was excellent!

When leaving the church, after greeting the people and talking to some of them, a lady who approached me said: “Father, I don’t know how to thank you. I highly appreciated your sermon. It is very lively here. And as everyone sings, I come here for two months in the summer. During the rest of the year, I lead the songs in a parish. The people don’t take part so well. You know this is an opportunity to make converts. How I would like very much to come every Sunday!”

Here is a text that can be sent to Lommel (provincial office). At our age, in the provinces, we cannot do everything. All of us have the witness of our SSS mission at the heart of our celebrations. A possibility that many no longer have.

Tweet
Published in News
More in this category: « SSS Australia Holds Provincial Chapter Seeking Candidates for our Eucharistic Way of Life »
back to top