Human development in the light of the Eucharist 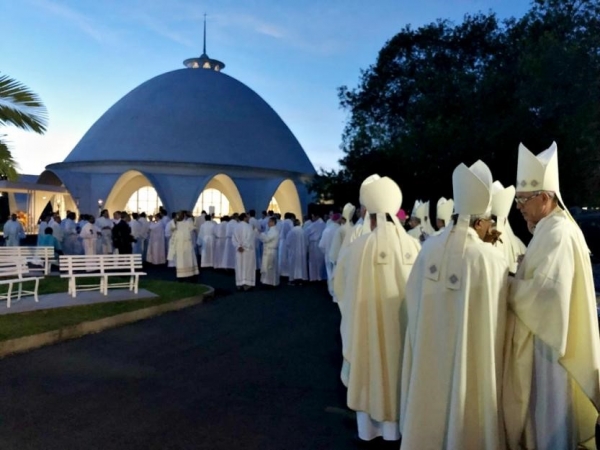 To commemorate the 50th anniversary of the Second General Conference of the Latin-American Episcopate celebrated in 1968 that issued in the ecclesial document “Medellin” an Ecclesial Congress was held in the city of Medellin, Colombia, from 23-26 August 2018, titled “Prophecy, communion and participation”.

The Congress was aimed at reflecting on the progress and regress with regard to the lines of action outlined by the Document in the critical way of “seeing, judging and acting” in the perspective of the proposals of the Second Vatican Council regarding the dynamism of the relationship of the Church with the world. This event was described as “the call for a prophetic renewal in the universal Church, specifically in the Latin-American Church, based on the need for conversion in order to live the Gospel as Christians in accord with the baptismal mission”.

Taking into account that the Medellin document focused its attention mainly on the people of the Latin-American continent, the Congress encompassed all aspects concerning the existential reality of these people. Within the fundamental aspects, attention was directed to “poverty” as a theological category in its multiple dimensions, to ensure the essential of true human development.

Human development is an implication of the Eucharist in all its dimensions. One of the aspects of this development refers to the concrete actions that must be expressed in the face of the complex reality of poverty, which was addressed and discussed at length at the Congress. The Eucharist provides us the legacy of the mission of social commitment in solidarity with the poor, which involves actively contributing to the genuine advancement of people in all that concerns their dignity (cf. RL 37).

As an urgent reality, poverty which is still evident in Latin-America, considered as a theological concern, requires a prophetic and liberating commitment, since it permeates all areas throughout the continent - the economic, political, cultural, educational, ethnic, social, injustices etc. All this impairs the integral development of persons as Children of God. Thus, the reception of the Medellin document was not immediate or completely serene, as Cardinal Porras, the Archbishop of Mérida (Venezuela) pointed out.

As SSS religious, we are called to confront these challenges in the light of the Eucharist, an inexhaustible source from which we examine the whole human reality. Thus, human development becomes the focus of our action in favour of the poor, by endeavouring to improve the living conditions of people and drawing up projects that foster the integral development of being human. For this the Congress called for a structural reform of the Church, in which the laity would be encouraged to play a leading role, a Church committed to the poor – “A poor Church for the poor”, as desired by Pope Francis.

It is a matter of urgency to be committed to fostering the path of a prophetic renewal regarding genuine human development in the light of Christ’s Gospel and the eucharistic mission.

Tweet
Published in News
More in this category: « Seeking Candidates for our Eucharistic Way of Life Province of Saints Peter and Paul holds Provincial Chapter »
back to top