Return to the Inter-African Scholasticate “Emmaus” 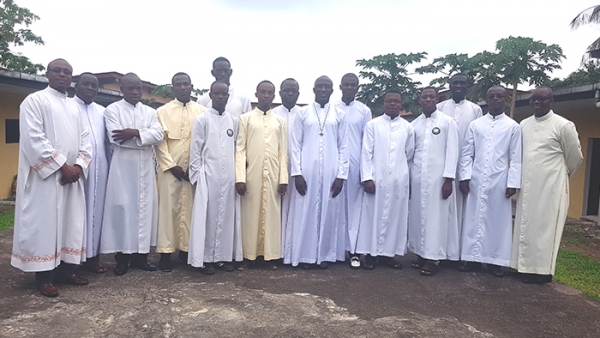 The return to the Inter-African Scholasticate “Emmaus” was marked by two very important activities, namely, the community meeting and the opening Mass.

On 15 October 2018 the Inter-African Scholasticate “Emmaus” held its first community meeting. During this meeting Father Jean Willy, the Rector of the Scholasticate, presented the community project which focused on the essentials of formation in the scholasticate. This project sets out an outline of the scholasticate as regards the objectives followed and the organisation of the house. After the Rector’s talk, there was a sharing of ideas about the timetable, services and communal times together.

As customary, the opening Mass of the Scholastic year was celebrated on 19 October 2018. The Eucharist was held in the chapel of the Scholasticate. It was Presided over by Father Barthélémy Kangu, the Provincial Vicar of the Province of Blessed Isidore Bakanja (Dem. Rep. Congo), the concelebrants being Fathers Jean Willy Mupila, the Scholasticate Rector and Jean-Paul Luzolo, the Director of the postulants. There were 13 scholastics present, coming from the five different provinces and the region of Africa, and members of the Aggregation of the Blessed Sacrament.

Two texts were the central focus of meditation: Romans 8:12-17 and Luke 24:13-35. The president in his homily spoke of the purpose of the Scholasticate as well as of the requirements of SSS formation based on RL n.58. Referring to the scriptural texts, he exhorted the scholastics to identify themselves with the disciples of Emmaus by living the same experience in order to spread the Good News and to be real missionaries of the Gospel. He emphasised also the importance of collaboration and the meaning of referring to the formators while aiming at excellence especially at the academic level in our way of acting.

At the end of the celebration, the Father Rector spoke in thanking the Superior General and his Council, the African Conference through its president, for the trust placed in his person and the formation team of the Scholasticate. He likewise expressed gratitude to Father Anaclet Bambala, the Superior of the Province of Blessed Isidore Bakanja, and to Father Barthélémy, its Provincial Vicar, the president of the celebration, as well as to all the SSS religious present at this Eucharist and to the members of the Aggregation of the Blessed Sacrament. Finally, he invited the scholastics to be mature and responsible, to acquire a sense of belonging to an international congregation, and also to be always available to the inspiration of the Spirit. After his works of thanks, the Father Provincial Vicar declared the year 2018-2019 of the Scholasticate Emmaus open.

This event was rounded off by a fraternal meal with the members of the Aggregation of Blessed Sacrament.

Tweet
Published in News
More in this category: « Arrival of Filipino Priests in Spain Programme de Preparation for Perpetual Profession (P4) »
back to top