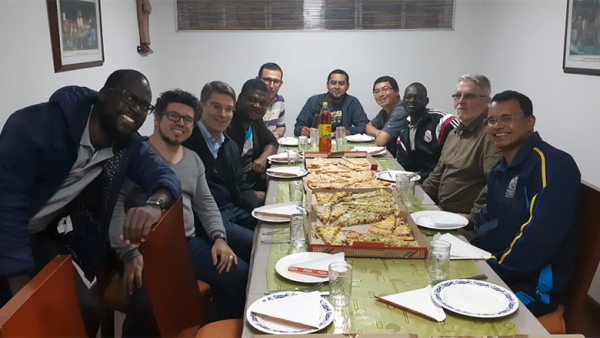 Behold, how good and pleasant it is when brothers dwell in unity!
For there the Lord has commanded the blessing, life for evermore.
(Psalm 133)

Dear brothers of the Eymardian Family, fraternal and Eucharistic greetings from Bogotá, Colombia. In a spirit of joy, fraternity and unity the CLAS met for the first time after the celebration of the Chapter of the two Provinces, Our Lady of Guadalupe (Argentina-Brazil-Chile) and Saint John XXIII (Colombia, Perú-Puerto Rico). This meeting took place from 19-21 November 2018 at the Vocational House of the Pre-novitiate Saint John XXIII, Bogotá.

The participants of the meeting were the following members by right of CLAS:

We opened the conference on the first day with an initial prayer in the morning followed by adoration. Then we recalled, by reading the Acts of the last CLAS meeting on August 2017 in Puerto Rico. We approved the text and began the workshops, reminding the new members of the CLAS mission, which is to create community, fraternity and unity in view of the SSS International Mission. From there the most recurrent matters of the Conference were about First and Ongoing Formation.

In the message of the Superior General, Fr Eugenio Barbosa, presented by the Vicar General, Fr José Antonio Rivera, the importance of the Conference in the SSS mission for Latin America was underlined, together with the challenges it faces in the congregational journey towards internationality, like inculturation, an economy of solidarity and a spirit of openness to the new paths shown by the last General Chapters.

In view of service we elected the coordinators of CLAS: Fr Camilo was elected President; Fr Marcelo Vice President and Fr Wilson confirmed as secretary. The following are some important points dealt with at the Conference:

a) A relationship of further closeness and mutual collaboration with the Northern Provinces, Saint Ann (USA) and Saint John the Baptist (Canada): through Fr Camilo a path of dialogue has been established with the Provincials of these two provinces, resulting in some attempts of approach.

b) Reports of the processes of First Formation from CLAS for: challenges and perspectives: with joy we share the positive experience of welcoming two scholastics from the Senegal Region, Christophe and Francisco, along the journey of internationality, besides the other two from the two provinces of CLAS; we value as positive the process of alignment of the stages of First Formation, like the Project Follow Me.

c) Regarding formators in the novitiate and scholasticate: we began a process of revision of these two areas and we will continue the formation of new formators for these functions in the following years, with the approval of the General Government.

d) Evaluation of the Eymardian Year 2018: We had undertaken the formation of the first group of scholastics who were preparing for perpetual vows and ordained ministries from the Latin American Scholasticate. This pertained to the path followed by the scholasticates William, Alexandre and Alfred. The journey was very positive and there are some suggestions to improve it for future students.

e) Meeting of Young religious for 2019: we are starting to prepare a meeting for young religious (scholasticates, religious for the first years of perpetual vows and guests from the Eymardian Family) for June 2019. The objective of this meeting is to think about the SSS Vocation Apostolate for Latin America starting from the witness regarding the gift of self in each religious. We must pray for the preparatory team.

f) SSS Mission of the CLAS from the Message of the 2017 General Chapter: we raised some possibilities of application of our Eymardian mission in the following years. Some proposals of joint actions were raised already at the direction of SSS Laity, at the International and Solidarity Missionary Formation of the Americas.

Finally we concluded our work celebrating the Eucharist and contemplating the “extension of the mystery” in the Scholasticate. We also shared the closing of the year of formation 2018 when everyone in their provinces will renew the vows before returning to formation in 2019. During the same celebration we participated in the “spirituality of the third table”, the gift of life of the Director of Scholasticate, Fr Wilson Jesús. We take advantage of this opportunity to express gratitude for the hospitality of the pre-novices of the St John XXIII Province. We also thank Fr José Antonio for his fraternal, prayerful and helpful presence among us. He was a true brother among brothers, as the Rule of Life reminds us. In gratefulness and the joy of serving,

Fr Marcelo Silva, sss
Provincial Superior, Province of the Our Lady of Guadalupe

Tweet
Published in News
More in this category: « Eucharistic day Reunion of Charismatic Eymardian Family Three were Installed Acolytes »
back to top