A missionary in Senegal 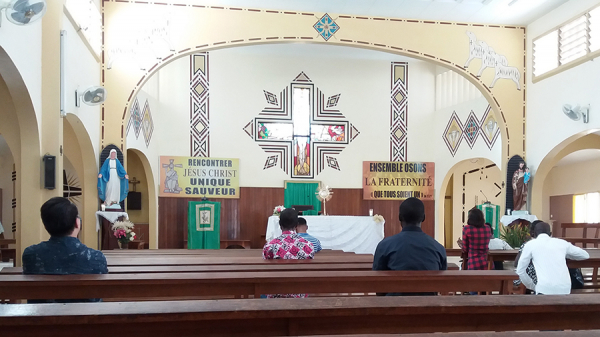 We are in a critical period of a pandemic, despite which I managed to be on holiday to rest a little. Personal contacts are reduced, but by computer I’m able to keep in touch. Since 1981 I’ve been in Africa, Senegal to be exact, where the Church is growing in the midst of a population that is 90% Moslem. Thanks be to God, we’re living peacefully and trying to be a leaven in society. Our Congregation of the Blessed Sacrament is opening two new communities this year: one in Guinea Bissau and another in Gandiaye, in the diocese of Kaolack, where one of our confreres, Father Martin Tine was recently appointed the bishop.

In Africa the number of Christians is increasing and there are also numerous vocations here to the priesthood and religious life. When I came to Senegal we had only one Blessed Sacrament religious; now we number thirty, among whom there are only two Italian religious. We’re grateful to God for making his voice heard in all the continents in order that we can walk in the light of his Word and be strengthened by the Bread of Life. Starting this year, since in Italy the number of our religious is diminishing, our religious in Africa are also taking over our parish of Our Lady of the Blessed Sacrament and the Canadian Martyrs in Rome. While we once we were setting out to go to Africa, now the Africans are coming to our aid. Let’s hope that this exchange of gifts may be fruitful.

The opening of new parishes among the poor makes us consider that God is working marvels among these people. I’ll give you an example. In our mission of Marsassoum many lads used to come from various villages to attend the middle school (secondary education from the age of 11 to 15). Two of them asked us to go to their village of Kikiako, 30 Km away, so that their parents could become Christians. Two of us, priests, decided to go with the two boys by car. The road was almost impossible. On arriving we tried to introduce ourselves; though the boys acted as interpreters into their own language, no one understood who we were. In the villages protesters passed by, persons belonging to sects, to NGOs… but who were we? After all our explanations, my confrere Father Yves and I sat down wondering. I had an inspiration. Standing up I said: ‘We are the Church of John Paul II.’ Immediately everyone stood up and enthusiastically said: ‘This is the Church we want; this is the true Church.’ Some years earlier John Paul II had visited Senegal and all by means of the local radio were aware of this. Then we told them that soon we would begin the catechumenate lasting three years to form Christians. Then we made the Sign of the Cross: everyone followed making it with great respect, even though they didn’t understand what it meant. See how those people needed to know God, who is a Father full of mercy towards all. After three years along those tracks the chassis of the car snapped in two and there was need for some means of travelling: bicycles, motorbikes and cars to continue.

Some of us travelled long distances to proclaim the good news to the poor, others, above all in the city of Dakar, are dedicated to the ministry of prayer, listening, availability to provide the sacrament of Confession. Our churches are always open and a place to meet the Lord in adoration of the Blessed Sacrament and to receive from it consolation and peace. There are many young university students from different francophone African countries coming often to the church to meet and pray. One of them, having completed his studies, before returning to his country, Gabon, came to say goodbye. He told me: ‘I’m so sorry to leave this church, because in my life I’ll not find any more a church like this, always open, with priests always available and welcoming.’ He returned to his country, to his home, but he’ll never forget the experience that he had of the Lord during his studies in Dakar.

I invite all of you to collaborate in this work of evangelization, so that youth, so numerous in Africa, may prepare to live and promote a more worthy life in their country. In this world, shaken by so much injustice and selfishness, let us pray for the coming of the kingdom of love and joy that the Risen Lord wants to bestow on all people.

On behalf of my confreres I thank all of you who support us in this work of evangelization and formation of religious. As you know, it is costly to send young people to school for many years so as to have a sound formation.

To inscribe a young seminarian in the school of philosophy and theology costs 950 euro per year. This school, where I’m teaching, is called the St Augustine Centre. We have on average 7-8 students for the 3 years of philosophy. The board and lodging of our aspirants are taken care of by our two parishes of Dakar.

Last modified on Friday, 20 November 2020 11:10
Tweet
Published in News
More in this category: « Diaconal and Priestly Ordination Colombia: A great light will shine in our life »
back to top