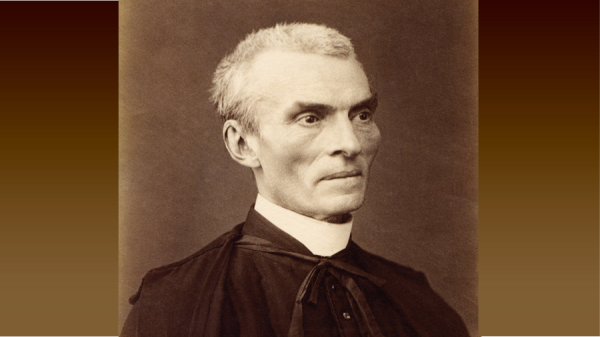 The patronal feast of the Parish of Saint Peter-Julian Eymard

Firstly everything for the Lord

The patronal feast was held on Sunday 1 August.

“Firstly, everything must be for Him [the Lord]…” (PO 38,4). It all began on 23 July 2021 by a novena of prayer with Saint Peter-Julian Eymard, drawing on Father Eymard’s meditations on the different parts of the eucharistic celebration. To encourage the fruitful participation of the faithful, the celebrant of the day presented Father Eymard’s essential message during the homily and the people were able to deepen their meditations by means of the booklets made available to them.

A day of prayer on the Holy Family and Father Eymard took place on Thursday 29 July 2021 at the Shrine of Our Lady of La Salette. It was shaped around the prayer, meditation, reflections, and a sharing of experiences based on Father Eymard’s thoughts about the Holy Family. Twelve pilgrims gathered in the Eymard Chapel of La Mure for a time of prayer on the Gospel of the presentation of the Child Jesus in the Temple (Lk 2:22-40). The Child Jesus brings love, mercy, vitality to the Holy Family and to all families. He eliminates all isolation, all indifference by fostering openness to other persons, since Jesus is the treasure and centre of love in every family: “So my home, my family, my centre is Jesus in the house of the Society where I live” (NR 44,115).

Then, the pilgrims went by car to La Salette. They took part in the Mass celebrated in honour of the family of saints Mary, Martha, and Lazarus. They are models of the renewal of fraternal life through prayer, forgiveness and reconciliation, work and openness to others. A sharing of life experiences is as important as the pilgrims noticed during the pause for the last meditation at the shrine. Thus prayer, fraternal life and service are the bases of a family’s vitality, which includes forgiveness. When illness, difficulties, misunderstandings come our way, prayer saves. With Jesus Christ at the centre, nothing is ever a permanent obstacle. Better ways always open up ... as one of the pilgrims observed: “one can be reconciled with another person even after his death”. Nor is work left out; it is a place of sanctification of the family (Col. 3:17-25), its secret consisting in setting time for activity, carrying it out and completing it with a supernatural intention (cf. St P.-J. . Eymard, NR 115).

“The Eucharist is the radiant festivity of fraternity that we can make endure always” (PG 244,7). After a guided adoration and visits to the eymardian places of the town of La Mure, about a hundred and fifty people gathered on Sunday 01 August 2021 for the single eucharistic celebration of the feast of Saint Peter-Julian Eymard, the Patron of the parish. Monsignor Guy de Kérimel, the Bishop of the diocese of Grenoble-Vienne presided. Concelebrating with him were a dozen priests, among whom were Frs Eugênio Barbosa Martins, the Superior General, Domenico Avogadro and Matteo Magri, respectively the Superior and Treasurer of the Province of Our Lady of the Blessed Sacrament (Italy), Fr Joseph Phuoc, the Procurator General, two delegates of the Shrine of Our Lady of La Salette, confreres of the Communities of Colombier and La Mure. The bishop’s essential message can be summed up like this: hunger for the Absolute, the Eucharist, our treasure, is humankind’s true hunger. Hence the importance of rediscovering the path of interiority, of divine love. (Read the whole homily on the following page)

To turn from one aspect of the festivity to another. “Through it [Eucharist], we are related, we eat at the same table, we have the same Father who is in heaven” (PG 242,3). For the first time since this pandemic, the parish provided a drink and a meal to everyone in the parish hall; even the mayor of the city was present. The people would have heard Father Eymard ask: “How, said Saint Paul, should we not have the same spirit of charity, we who eat the same Eucharistic bread? [cf. 1 Cor 10:17] Jesus Christ is then all in all.” (PG 242,3).

“Saint Peter-Julian was a true apostle who wanted to proclaim the Gospel and lead people to welcome the love of God in the Eucharist and to unite themselves to Him through the offering of themselves.” 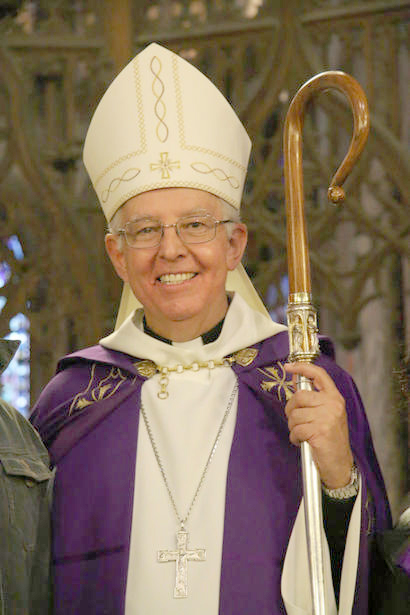 Hunger is one of the most fundamental experiences, the most basic of human beings. They have an imperative need to feed themselves if they are to live. God our Creator has placed the goods of nature at their disposal so that they will find something to be satisfied with. God created them to live, and He gives them a superabundance of food, even in the wilderness where He led His people, the children of Israel, after they came out of Egypt; Jesus also fed the crowds by multiplying the five loaves and the two fish to satisfy those who followed him.

However, people do not live by bread alone: deep within them, they experience a hunger for meaning, hunger for love, hunger for truth, a hunger for the absolute. In a society of consumerism this hunger is stifled: human beings become more concerned to satisfy the flesh than the soul. Modern people have neglected and damaged their soul in thinking they could find in the things of this world what fulfils their being. What we notice every day in our contemporary world, Saint Peter-Julian observed in his time. Jesus Himself is clear about what motivated the crowd to seek Him; indeed he came to nourish them copiously: “Do not work for nourishment that perishes” he said, “but for the nourishment that endures until eternal life, the kind that the Son of Man will give you“.

The more human beings have material goods, the more they are tempted to find in them the meaning of their life, and to make them a substitute food for his soul. In fact, for lack of spiritual nourishment, their soul wastes away and sinks into darkness. When, in a society, everything is directed towards material growth and the enjoyment of material goods, it loses sight of the greatest treasure that can exist and fill it: the bread of life, the Eucharist.

Only Christ can satisfy our souls’ hunger. This hunger is experienced again more and more in our disillusioned materialist world. It seems today that the various crises we are going through are arousing a hunger for something else. Our souls have been too neglected in recent decades; it is time to take care of them, to cleanse them by the sacrament of reconciliation and to nourish them with the bread of life, at the table of the word and that of the Body of Christ. During these times, they need to rediscover their strength.

Saint Peter-Julian, from his childhood, was drawn by the Eucharist, by the living Jesus, truly present in the Blessed Sacrament, on the altar and in the tabernacle. Responding to God’s call, he became a priest of our diocese of Grenoble; so, in Jesus’ Name, He fed believers by distributing the bread of life to them. As a priest, he intensely lived the celebration of the Eucharist; he was concerned with responding to the gift of God by being himself entirely for God, through asking for the grace to give himself really to God. This is what prompted him to give up his ministry as a diocesan priest in order to turn to religious life.

In the meditations of his retreats, in his examinations of conscience, he felt that he had not yet really given himself to God. Little by little, when he became a Marist, he understood God’s call to create, in the Church, a community of men who would make the Eucharist the centre of their life and would be apostles of this great sacrament, to help the baptised and the world discover this little-known treasure. This is how the Congregation of the Fathers of the Blessed Sacrament was founded, not only to honour and adore Jesus Christ in the Blessed Sacrament, but also to lead to Eucharistic communion those who did not have access to it. In the large cities of the XIXth century, many children, because having to work underaged, could not be catechized, nor make their First Communion. In Paris, St Peter-Julian developed the Work of First Communion. While it is good to nourish the body, but it is better to take care of body and soul.

Saint Peter-Julian Eymard suffered from seeing how much the Eucharist was ignored and neglected. Sadly, this observation remains true today. Many baptised people are no longer nourished because their faith is failing and ill-informed. Others receive Communion with indifference, expecting nothing from this Communion which is not perceived as an encounter with the living Christ. Others to whom the priest or a parishioner has brought Communion place the Body of Christ in a drawer where it risks slowly becoming mouldy. Jesus comes to us, comes among us and we take notice of Him; He comes to our home and we stay outside of ourselves.

Saint Peter-Julian was a true apostle who wanted to proclaim the Gospel and lead people to welcome the love of God in the Eucharist and to unite themselves to Him through the offering of themselves. The Eucharist was for him a divine fire which set him ablaze and urged him to put himself at His service thus enabling Him to set the world ablaze. The Second Vatican Council will later say that the Eucharist is the ‘source and summit of evangelization’! (Presbyterorum ordinis, 5) This was the intuition of Saint Peter-Julian. For him, as for the Council Fathers, evangelization is the fruit of communion in the sacrament of charity and of deep union with Christ: this is why, after Mass, becoming one with the Christ, we are sent on a mission; the love of Christ prompts us to bear witness by word and deed. “Source and summit”: moreover, the word of God welcomed into hearts leads to communion with the living Christ in the sacrament of the Eucharist. Evangelization is not complete until people who have been evangelized have been initiated into the greatest of the sacraments, until they have truly united with Christ in the Eucharist.

The Eucharist is the outpouring of divine love given to people; it is the real presence of Jesus at work to heal and save the world. May the fire of divine love, which burned in the heart of the Saint of La Mure, burn in the hearts of all the baptised to share it with all humankind!

Last modified on Friday, 27 August 2021 08:21
Tweet
Published in News
More in this category: « La Mure: “Toward discovering a man and a saint” - Pilgrimage in the eymardian places Feast of Saint Eymard »
back to top