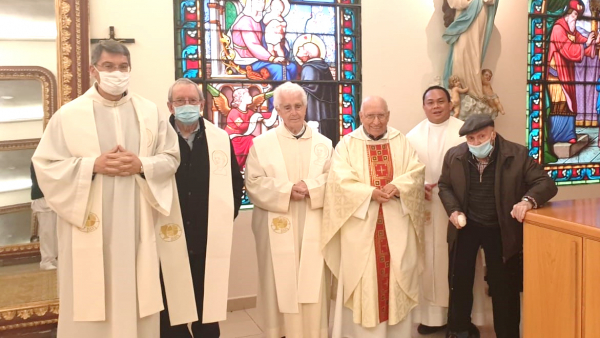 On Sunday, 25 April 2021, Good Shepherd Sunday, the community of Madrid A. Sainz de Baranda celebrated the sixtieth anniversary of the priestly ordination of Fr José María Lasierra Bernad. Aragonés, from the province of Huesca, born in the illustrious town of Ainsa more than 91 years ago. He completed his priestly studies in his own diocese and, longing for a more contemplative life, chose the Congregation of the Blessed Sacrament. He entered our novitiate in Tolosa in 1958 and, having been dispensed from the second year of novitiate, he was assigned to Madrid together with the promotion of the ordained in 1959, with whom he followed, while in Madrid, the socalled pastoral year, and received the priestly ordination on 9 April 1961.

The central moment of the day was the celebration of the Eucharist at 12 o'clock in the morning at which some of our Blessed Sacrament religious participated and numerous faithful who wanted to accompany and personally thank Fr Lasierra for his dedication and ministerial service. The Eucharist was presided over by Father José Mª Lasierra himself who, in his introduction, alluded to his people and the origin of his vocation.

In the homily, preached by Fr José A. Rivera, based on the message of Pope Francis for the World Day of Prayer for Vocations, Fr Rivera compared the priestly path of Fr Lasierra to the three key words of vocation, indicated by the Pope in relation to the life of Saint Joseph: dreams, service, and fidelity.

“Your dream of being a priest, the service rendered to this community and the sixty years of priestly ministry give good proof of the maturity of your vocation, not as a sacrifice - Father José Antonio concluded, addressing the person being honoured - but as a sign of beauty and the joy of love to which the Pope alludes.”

The celebration ended with the beautiful and eloquent testimony of Maria Teresa Martínez, one of the many parishioners with whom Fr Lasierra has had a great friendship for many years. Among other things, she said: “[…] at times he seems like a monk, a monk totally devoted to people. They look for him, they call him on the phone, he communicates a lot with people. We love him very much, as he already knows.”

The festivity and the joy continued in the dining room with the delicacies prepared for the occasion and the delicious cake that Fr Allen Peña has accustomed us to. Photographs and the preparation of the ceremony were carried out by Fr Dante Mejillano. With this priestly anniversary we cannot help but also refer to his longevity from the date of his birth and that of his 62 uninterrupted years in this community of Madrid A. Sainz de Baranda. Here he continued what he began in Toulouse and was able satisfy his contemplative aspiration: day and night adoration, full choral office and worship of the Lord in the Eucharist.

Fr José María Lasierra is like a living chronicle of this community throughout his continued presence in it from 1959 to the present day. He endorses the reference to “living chronicle” by his lucid memory of people and events from all those years to the present day. He, for his part, has rendered, and continues to render, multiple services. At the time he was superior of the community, he provided pastoral services, and for many years he has been taking care of needs in the sacristy and the worship of the church; the singing and the organ have been his for years. As well as his watchful eye to detect any true or supposed event that may occur in the community or in relation to it or any of its members. He remains alert.

Last modified on Friday, 27 August 2021 14:53
Tweet
Published in News
More in this category: « The Colombian scholastics’ new experience of the charism in Brazil The Blessed Sacrament Fathers at Sant’Agata in Arfoli Reggello (Florence) 1984 - 2020 »
back to top