60th anniversary of the Canonisation of Saint Peter-Julian Eymard 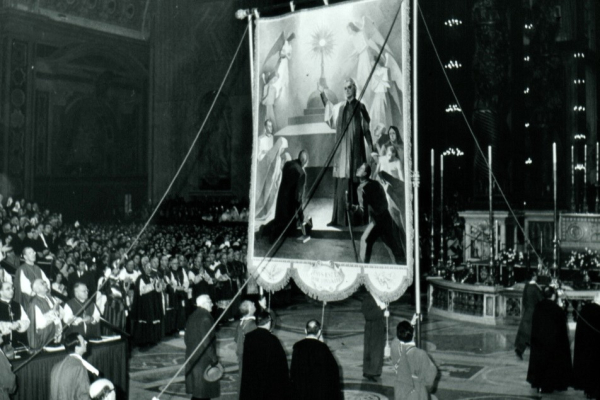 The 60th anniversary of the canonization of Father Eymard is one of the special events celebrated in the Church last year, which happens to be also the 60th anniversary of the Second Vatican Council. Pope Saint John XXIII canonized him during the Mass of 9 December 1962, at the end of the first session of this Council. Various kinds of events of have marked the course of the preparation of this celebration. 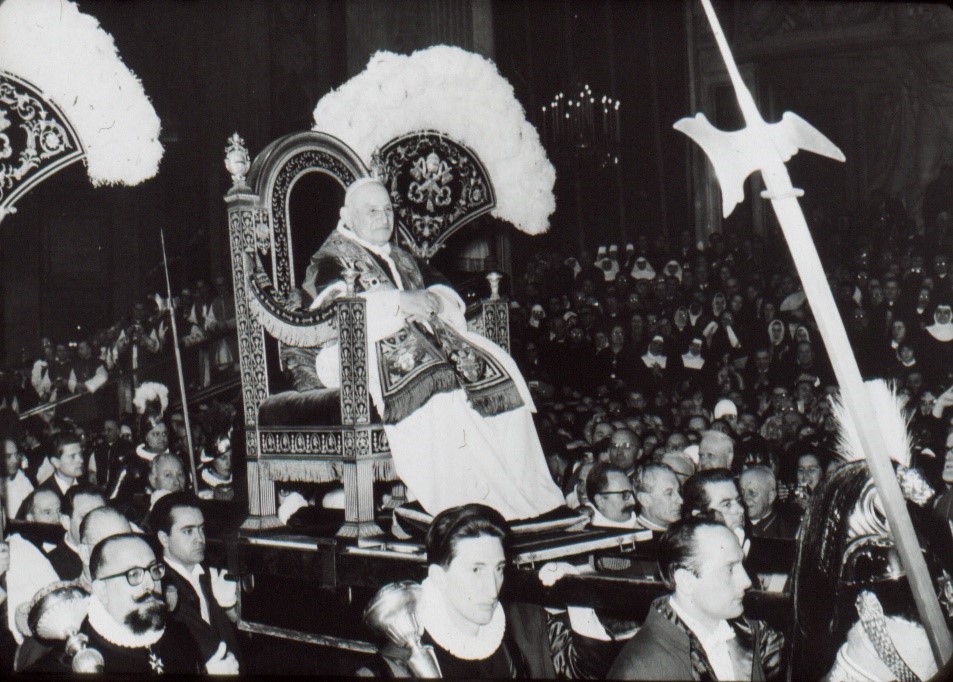 From 2 p.m. to 5 p.m. on Saturday, 15 October, 28 people gathered at the ‘Pont du Prêtre’, in the Commune of Valbonnais, about twenty kilometers from La Mure, to begin a pilgrim walk. Father Eymard attached great importance to the land, which recalls history, renews a person’s bond of with God, their parents and the generations to come. The earth is also the place of various sufferings. It constitutes a challenge in the quest for ways of being effectively committed to the service of the poor. 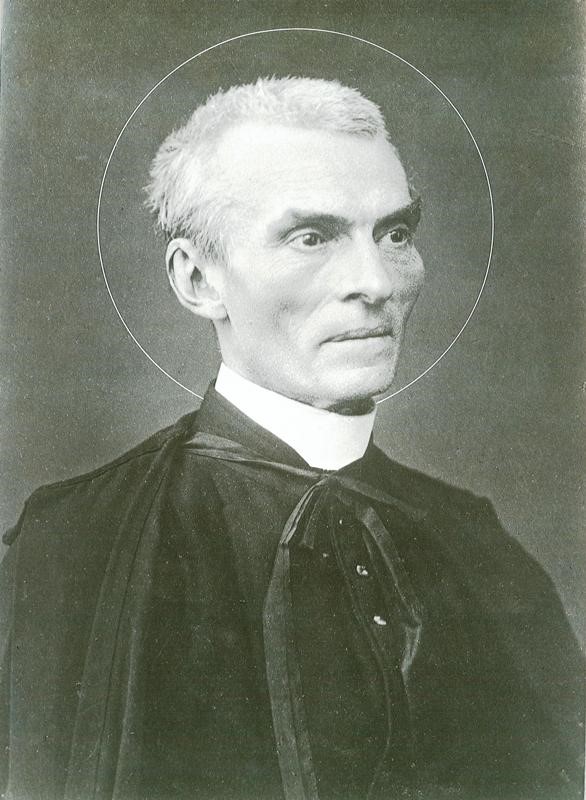 The Eucharist was the focus of his thoughts, his words, all his undertakings. It is the expression of God’s love. Eymard knew how to express it in adoration and commitment to various works of eucharistic apostolate. A charism greatly relevant for the world today. How would this saint’s eucharistic message apply to the present challenges of our societies: fraternity, peace...?

The same Centre of Spirituality presented six catechises and four interviews on diocesan radio stations: 'Espérance’ (Hope) from the diocese of St Etienne, 'Maria' from Toulon and 'Radio Chrétienne Française' from Grenoble. The latter hosted two interviews on 17 November and 13 December, respectively with two of our religious: Fr. Olivier Ndondo, Provincial Superior of Isidore Bakanja, of the Democratic Republic of Congo, with the Centre of Spirituality; and Fr. Eugenio Barbosa Martins, Superior General of the Congregation of Religious of the Blessed Sacrament. 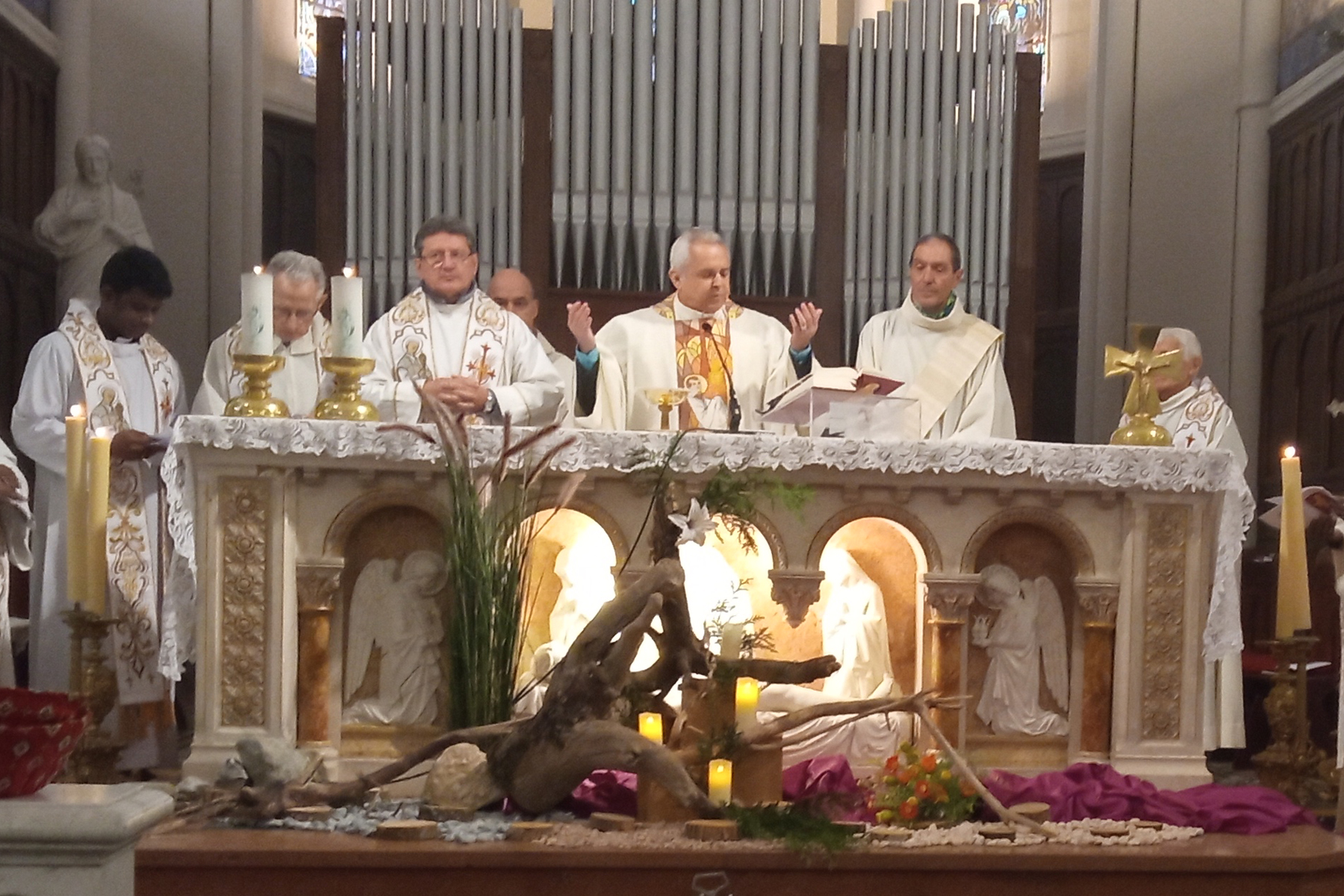 Father Eymard drew attention to the importance of remembering the grace of baptism. This grace, ever active, impels a person toward being in a process of perennial renewal. Strengthened by the grace of the revelation of God’s love in creation, Eymard invites people to regard things from the perspective of God's goodness to humankind... to take the shortest path, that of love that gives everything without self-interest. Eymard, concerned about the lack of people in the church, had the audacity and the courage to bring the light of the Gospel to the poor, to the ragpickers, in the peripheries. He accompanied them by means of catechesis and all other forms of help.

Like his contemporaries in Lyons, Blessed Frédéric Ozanam, Antoine Chevrier, Blessed Pauline Jaricot, Saint Peter-Julian Eymard deeply understood the inseparable link between Jesus in the Eucharist, the poor and the proclamation of the Word of God. This saint of the Eucharist pointed out that true happiness consists in setting out to seek the God’s love in the Eucharist and in becoming a witness to it by continually surrendering one’s self and being committed to caring for the poor.

On Sunday, 11 December 2022, the parishioners of the 44 sub-parishes gathered in the church of La Mure for the eucharistic celebration of the 60th anniversary of St Peter-Julian Eymard’s canonisation. Reverend Father Eugenio Barbosa Martins, the Superior General of the Congregation of the Religious of the Blessed Sacrament presided at this Mass. Concelebrating with him were Blessed Sacrament Fathers, Norbert Pagnier and Aimé Porret from the Community of Colombier-Saugnieu, and the priests and deacons of the La Mure parish.

“Our eternity depends on the sanctity of our lives”, the Superior General said in his homily, recalling the importance of celebrating and holding the feast. Festivity helps to situate conflicts and needs into perspective. It fosters meeting, welcoming, joy and sharing. This event of Father Eymard today nourishes our dreams and enriches our witness as disciples of the Lord. While in precarious health, Eymard expressed the fruitfulness of his life in various apostolic activities. His eucharistic passion is a challenge for us in seeking answers to the new demands of the mission. Let us be illumined by the greatness of Saint John the Baptist: during trials, he let Jesus decide. He found his joy in Jesus. So let us live this path of holiness traced out by Eymard with the same joy as that of Saint John the Baptist.

The parish community continued the celebration in the parish hall with fraternal conversation over a drink and a shared meal. We are also called to take up today's challenges following the example of Saint Peter-Julian Eymard’s eucharistic passion.

Last modified on Friday, 27 January 2023 08:47
Tweet
Published in News
More in this category: « Merry Christmas and Happy New Year 2023! Celebrating 60 years Canonization of Eymard in Vietnam »
back to top