History of the SSS Community in Cali Colombia 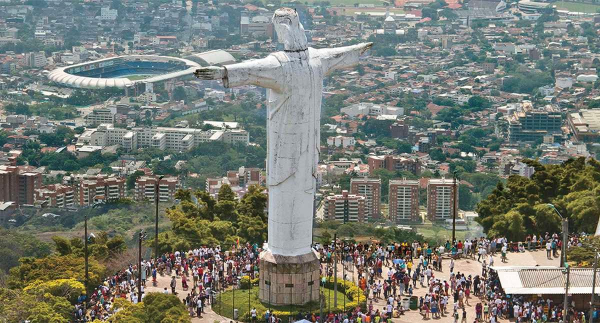 At the “El Rodeo” neighbourhood, without anyone knowing how, the parish priest of the nearby parish had reclaimed a piece of land, in a symbolic way and as a sign of possession, in the context of a land that had been invaded. He wanted to build there a church and had put in the spot a few bricks that resemble the beginning of a wall, measuring only half a meter. This wall seemed to be saying “Attention! This area has an owner!

The SSS religious, considering that this could be the place where the project could be developed, dedicated himself to look for a place for the first community to live. In this way the following day, while still living at the Lauritas Sisters Convent, the father returned to the neighbourhood determined to find a small house as close as possible to the mentioned piece of land, on which in the future the church and the residence for the community could be built.

He found a house there for rent and made an agreement with the person living there to exchange it for another house that the father had found in another part of the neighbourhood. In this way the religious would be able to stay there, just in front of the land for the construction of the church.

At this point, we must say something about the background of the neighbourhood. The land had been a ranch belonging to one of the richest families of the region. This ranch overnight was occupied by poor people coming to the city totally destitute. The success of the squatters was not easy: there were 17 attempts to invade. The police on the one hand and planes from a nearby air force base sprayed tear gas over the occupants to make them flee.

With the death of a woman called Celmira Prado, the invasion succeeded. This woman was acclaimed as “a heroine”. However, this is not the place to relate the full story of the vicissitudes in which our parishioners were involved.

Once the SSS religious obtained a house to rent he went to his SSS brethren in the community of Popayán, convinced that after greeting them and relating what he had been doing he would receive sufficient help to furnish the house. The brothers gave him a mattress and some blankets, with which things the religious returned to Cali.

Last modified on Friday, 27 January 2023 09:44
Tweet
Published in News
More in this category: « Province of Our Lady of Africa - Ordination to the Priesthood in the Cathedral of St Anne of Thiès
back to top